The Motorola Razr launched earlier this month to much fanfare due to its folding [plastic] display and its design that gives a clear shout-out to Razr flip phones from year’s past. While we had previously been presented with a hastily-presented teardown of the Razr last week, the disassembly experts at iFixit have now given us a more thorough look at the $1,499 device.

As you might expect, iFixit explains that the Razr represents “numerous feats of engineering” to allow the smartphone to fold completely flat, and it adds that is the “most complicated phone-based contraption” that it has ever encountered.

Before slicing into the Razr, the teardown experts observed that the display is left vulnerable with a momentary air gap between it and the hinge when the device is closed. IFixit reckons that this design could lead to problems down the road as debris work their way into the crevices during everyday use. 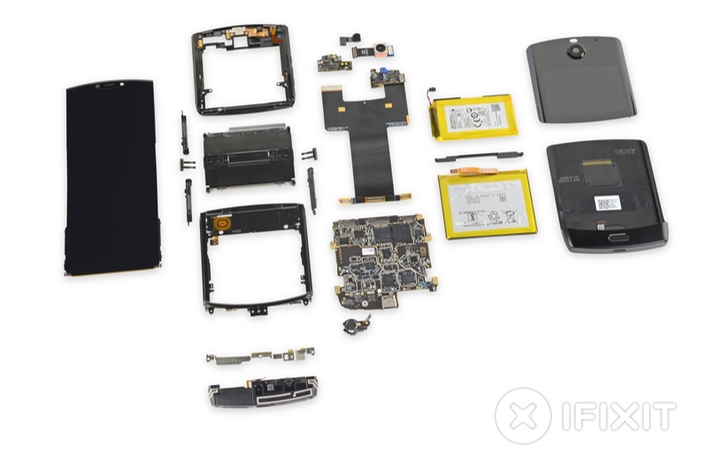 A heating pad was used to take off the bottom cover, which revealed one of two batteries (the second is in the top half). The bulk of the processing hardware for the Razr is also including in this lower half, like the Qualcomm Snapdragon 710 SoC, 6GB memory, and 128GB NAND flash. Access to the display panel was provided by removing a few Torx screws and removing a metal bracket. As a side note, the teardown crew wonder aloud how Motorola could possibly charge “only” $299 for screen repairs on the Razr.

Given the complexity of the teardown, glued-together components, soldered charging port (one of the most often damaged parts of a phone) and “multiple flex cable booby traps” the Razr earned a repairability score of 1 out of 10… yikes.

With that being said the launch of the Razr has been mostly overshadowed by the similar Samsung Galaxy Z Flip. The Galaxy Z Flip by all accounts features a more premium, creak-free design, a glass (versus plastic) display, a faster SoC (Snapdragon 855+), more RAM and storage (8GB/256GB versus 6GB/128GB), better cameras, and a most importantly, a lower price tag of $1,380.