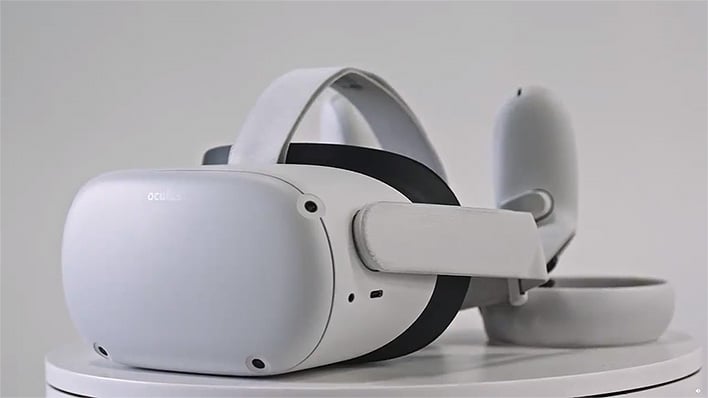 Oh Facebook, you sly dogs, you. The social media juggernaut temporarily went live with a website detailing its unannounced Oculus Quest 2 virtual reality headset (as has been previously rumored), which qualifies as a leak. But whether it was a leak in the true sense of the word, well, only Facebook truly knows. Either way, we have some specifications and features to share about the Quest 2.
While the revealing webpage is no longer so revealing, a couple of announcement videos have been archived on the web. They provides some details about the upcoming VR headset, as well as some clear looks from various angles, one of which you can see in the image posted at the top of this article. So, what are looking at for the vitals?

Facebook's promotional videos also indicate the Oculus Quest 2 will feature 6GB of RAM, compared to 4GB in the first-gen Quest headset. In addition, it will have up to 256GB of onboard storage, versus 128GB and 64GB storage options for the first-gen Quest. And in the promo video above, it is said the Quest 2 offers a "nearly 4K display," or almost 2K per eyeball.
As Facebook points out, that's around 50 percent more pixels than the original Quest, which offers a resolution of 1440x1660 per eyeball, and is powered by a Snapdragon 835 processor. So the Quest 2 is bringing some beefier specs to the table. It will also support 3D positional audio.
Beyond the speed and resolution improvements. Facebook's video tout superior comfort with a new soft-touch strap, and updated controllers with "new ergonomics for an even more comfortable experience." In some cases, Facebook says you can ditch the controllers and use your hands instead, by way of tracking cameras on the standalone headset.
Neither video mentions a price or release date, but given the leak, we have to imagine it's coming very soon.