One of the most anticipated motherboards for Intel's 12th Gen Core "Rocket Lake" processors has finally arrived. We are talking about EVGA's Z590 Dark, which it introduced in January of this year. At the time, EVGA had not said when the board will actually release to retail or how much it will cost, but now we know.
For the time being, the Z590 Dark is an "Elite Member Exclusive" item, a program users can sign up for if they have purchased an EVGA product in the past and/or are particularly active in the company's forums. As for the cost, well, brace yourself—the Z590 Dark checks in at $599.99 (MSRP).
That puts it right up there with the most expensive Z590 motherboards on the market, like MSI's MEG Z590 Ace Gold Edition and the ASUS ROG Maximus XIII Apex. However, MSI still holds the crown for most obscene pricing with the MEG Z590 Godlike, a $999.99 landing pad for your Rocket Lake CPU.
As for what EVGA's premium pricing gets you, the short answer is a high-end motherboard built for the rigors of extreme overclocking. The longer answer is, a boatload of amenities and top-tier features, like a 10-layer printed circuit board (PCB) design, a 21-phase voltage regulator module (VRM) arrangement, and a CPU socket that is rotated 90 degrees to facilitate extreme cooling solutions, to name a few.
The board features a pair of DIMM slots supporting up to 64GB of DDDR4-5333+ memory. It also wields two metal-reinforced PCI Express 4.0 x16 slots (SLI-ready), three M.2 slots, eight SATA 6Gbps ports (six native, two connected to an ASMedia controller), fan and pump headers, and a couple of Probelt headers. 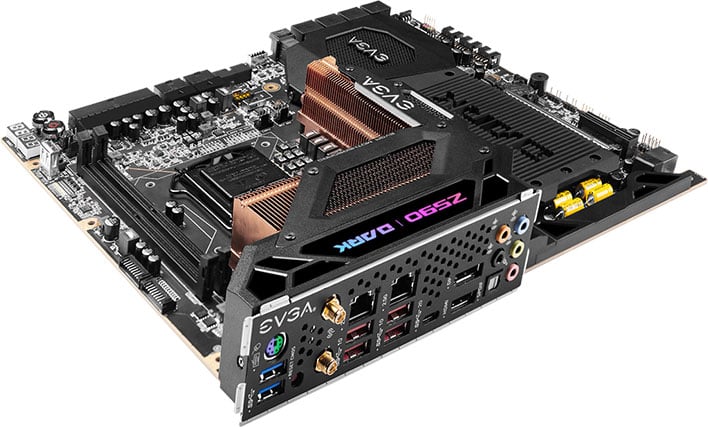 The rear I/O is home to an assortment of ports, including a pair of 2.5G Ethernet ports for ultra-fast wired connections. You'll also find an assortment of USB ports, various audio jacks, an old school PS/2 keyboard and mouse port, display connectors, and a couple of Wi-Fi jacks to connect the antenna.
Overall this is a sleek looking board with some neat features, like right-angled power connectors and multi-function POST indicators. Other than the high price, the only question mark is the timing—with Alder Lake being right around the corner, and bringing with it support for DDR5 memory and PCI Express 5.0, releasing a Z590 motherboard this late in the game might be met with a limited audience.
The high-end amenities work in EVGA's favor, though, so we're sure the Z590 Dark will find a home among some enthusiasts. If you're interested, you can hit up the Z590 Dark product page to order one.
For those of you who are wanting to build around a Ryzen processor instead, hang tight, EVGA has something up its sleeve for you as well—the recently teased X570 Dark, which will rank as EVGA's first motherboard for Ryzen when it releases.