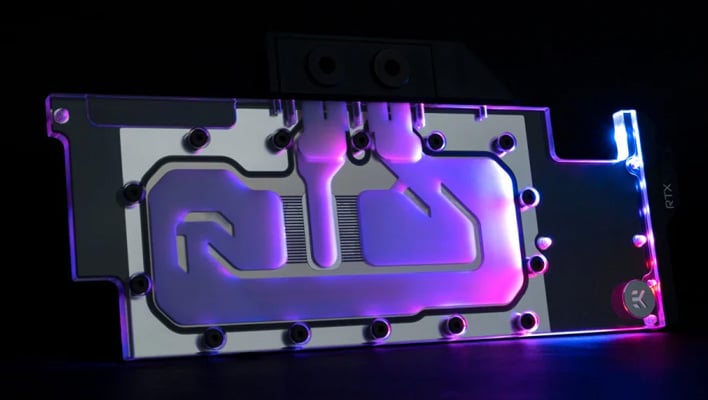 At this point, practically every person on the planet knows NVIDIA is getting ready to introduce a new round of graphics card for consumers, based on its Ampere GPU. The big day is presumably September 1, which is when NVIDIA will hold a GeForce Special Event. As we await, the liquid cooling folks at EK Water Blocks have jumped on the hype train by teasing upcoming designs that could be ready in time for launch.
On the company's official Facebook page, EKWB has been active reminiscing about past water block designs, as part of NVIDIA's Ultimate Countdown campaign reflecting on 21 years of GPUs. And it is through those posts that we get some hints of EKWB's future product plans. That's because the question that keeps coming up is whether or not the company will have water blocks ready by the time NVIDIA's GeForce RTX 3000 series arrives. 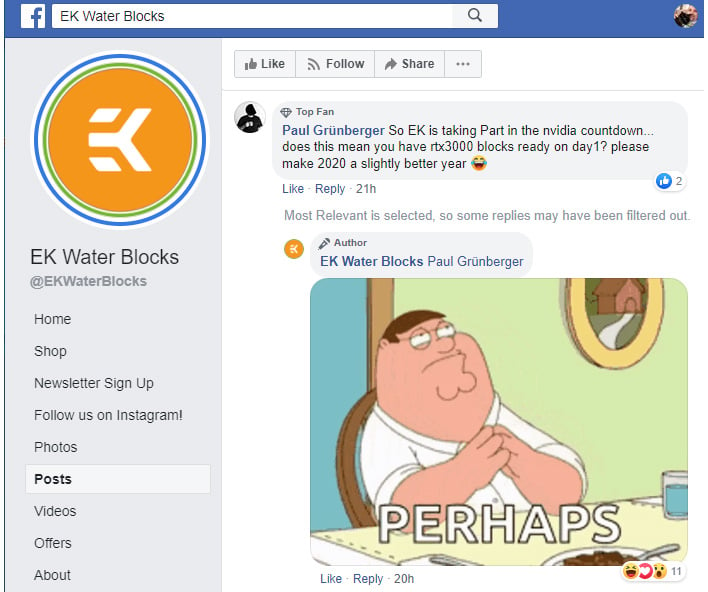 In a post that went up yesterday celebrating 2012 and the release of the EK-FC680 GTX FTW GPU water block for EVGA's GeForce RTX 680 FTW, the company played it cool when asked if it would have new products available for the GeForce RTX 3000 series on day 1. EKWB's replay was a meme of Peter Griffen coyly saying, "Perhaps."

EKWB was more direct in a separate Facebook post, when asked essentially the same question. The post has since been deleted (I saw it as I was writing this article, but it appears to be gone), but here's how the exchange went...

Jon Murray: Hey EK Water Blocks you guys going to have some 3000 series blocks on game day? Last time I had to start at my boxes 2080 Ti for a month.

EKWB: Jon Murray we'll have some things ready at or close to close.

EKWB also added a smiling emoji to the end of its reply. And it caught the attention of NVIDIA, which dropped into the discussion by way of its official GeForce account and posted the eyes emoji.
On a related note, the GeForce RTX 3090 is poised to be a massive card, if a recently leaked picture is any indication. In the photo, a supposed triple-slot GeForce RTX 3090 sits next to a GeForce RTX 2080, and it dwarfs the Turing card. It does appear as though the Ampere card had been enlarged in the photo, but even so, it still looks like a bigger part.
That card (and maybe others in the next-gen stack) might also use a new 12-pin PCIe connector. Seasonic posted pictures of a 12-pin adapter cable, which converts a pair of 8-pin PCIe connectors for at least one of the new cards. It's not clear if that is a final design, though. Also interesting, the box for the new cable states a 850W PSU is recommended.