Are we in September yet? No? Well, alright then, let's go ahead and proceed with the barrage of next-gen GeForce RTX graphics card leaks. Stepping into the leaked limelight this time around is a set of pictures purportedly showing the upcoming GeForce RTX 3090, a massive beast of a card that dwarfs the current-generation GeForce GTX 2080 in a side-by-side comparison (though quite to the extent depicted...more on that in a moment).
This is another low-quality photo, as is frustratingly typical when it comes to leaks, though we have seen worse. We've cleaned up the lighting a bit, but quality aside, the interesting thing here is the expansion bracket. Assuming this is shot of the actual GeForce RTX 3090, it is going to occupy three expansion slots (or at least this iteration does—it could be an early prototype).
According to @GarnetSunet (or James), who uploaded the photos to Twitter, this three-slot card will priced at $1,400 (he initially stated $2,000, but offered up a pricing correction in a follow-up tweet). James identifies the card as a GeForce RTX 3090, but also says "this is the titan of this gen." We take that to mean this card is intended to occupy the space that would otherwise be reserved for the Titan RTX.
Whether that is actually or not obviously remains to be seen. Early information has been rather scattered—we've seen leaks and rumors suggesting the GeForce RTX 3090 will ship with 24GB of memory, which would certainly be a Titan-level card, but there is also a technical brief from Micron floating around that indicates it will arrive with 12GB of ultra-bandwidth GDDR6X memory.
For reference, the GeForce RTX 2080 Ti with 11GB of GDDR6 memory debuted at $999 ($1,199 for the Founders Edition), whereas the current-generation Titan RTX with 24GB of GDDR6 memory launched at $2,499. Both of those are two-slot cards (reference designs).
James also shared pricing on several other next-gen GeForce RTX cards. According to him, here's how it will break down...
It's all plausible, but far from verified. For comparison, here's where NVIDIA's Turing-based GeForce RTX cards landed at launch (rounded up a buck since it appears James has done that with the above prices)...
And then the Super models came out at the following price points (also rounded up a buck)...
It's not clear if the prices shared by James are starting prices, or for Founders Edition models. In any event, here is the other photo of the GeForce RTX 3090 he shared on Twitter... 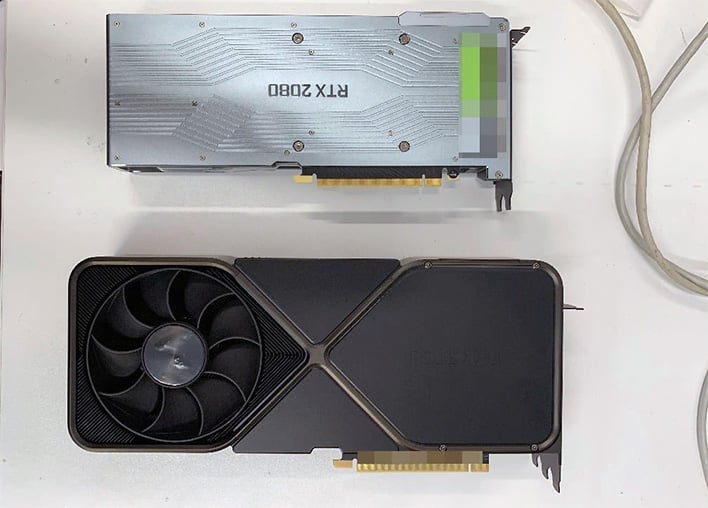 It looks to be a bigger card than the GeForce RTX 2080, though not to the extent the pictures suggest. As pointed out in the Twitter thread, the PCIe insert on the GeForce RTX 3090 is bigger/longer, and it appears the image of the GeForce RTX 3090 has been blown up. If scaled down to the same size as the current-gen card, it is still a bigger model, just not totally overbearing—estimates put it at around 300mm long, versus 267mm on the GeForce RTX 2080.
Why the apparent photo trickery? According to James, the GeForce RTX 3090 is "closer to the camera due to being thicker." He also refutes that it is a fake photo, based on someone saying the shadows don't match up. His answer to that is the use of two light sources.
Anyway, take all this with a heap of skepticism. Fortunately the GeForce Special Event is right around the corner (September 1), so we will get some confirmed answers soon enough.