NVIDIA is on the cusp of launching a new generation of consumer graphics cards based on its Ampere GPU, and as we traverse the final days to its upcoming GeForce Special Event (scheduled for September 1, 2020), some new information has leaked out. As in, the GeForce RTX 3000 series could possibly require a new power supply connector.
What makes this latest leak a little more interesting than most is that it seemingly comes from Seasonic, a respected maker of power supply units (PSUs). Twitter user @9550pro gets props for spotting a post on the bilibili forums from an apparent Seasonic employee, who shared the photo you see at the top of this article. It shows a new 12-pin PSU connector.
According to the post, the 12-pin cable connector is only being used for testing at the moment. In other words, the supposed employee does not yet know if NVIDIA's final design will actually introduce a new PSU connector. If that ends up being the case, it raises the question of how to handle the situation on the consumer side. 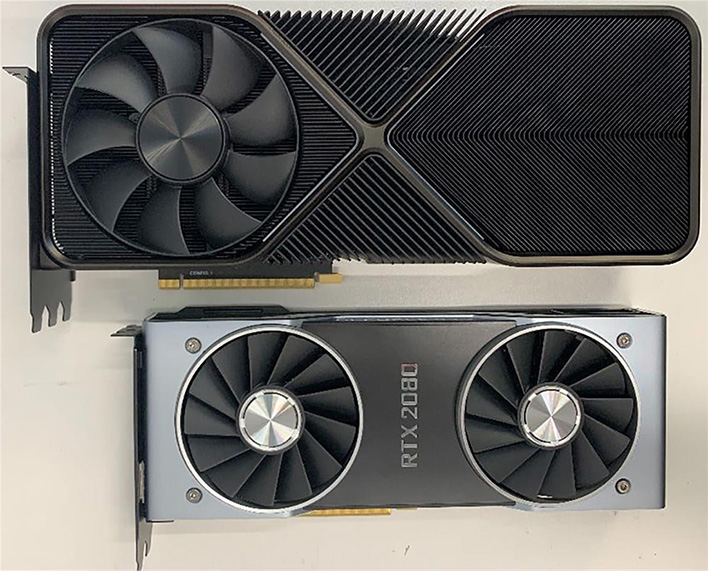 Leaked photo of an alleged GeForce RTX 3090, which appears to be enlarged (Source: @GarnetSunset)

There would be two main options—NVIDIA and its add-in board (AIB) partners could bundle a 12-pin adapter with their GeForce RTX 3000 series graphics cards, or PSU makers could supply the cable. The rep notes that the latter would come at an increased cost, which would presumably be passed on to consumers when purchasing a new PSU.
The folks at Tom's Hardware say they verified with their own sources that the new cable does exist. One end of the cable features a pair of male 8-pin connectors and the other end sports a 12-pin connector. It is labeled as an "NVIDIA 12-pin PCIe Molex Micro-Fit 3.0 Connector" and it measures 750mm long, according to the box pictured next to the cable. The two 8-pin connectors are designed to plug into Seasonic's modular PSUs.

Another interesting tidbit—the box indicates an 850W or higher PSU is recommended. Assuming all this is accurate, this will probably be reserved for NVIDIA's highest end Ampere offerings, like perhaps the GeForce RTX 3090. It's hard to imagine the entire GeForce RTX 3000 stack requiring such a beefy PSU, and to a lesser extent, a new connector type. We'll find out soon enough.