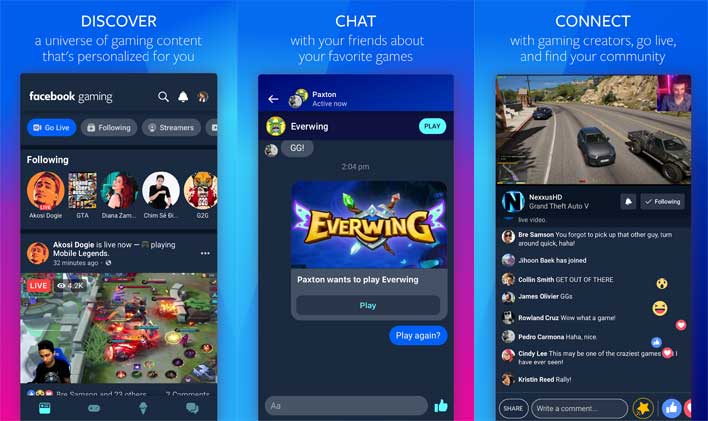 Facebook is launching a new live gaming app called Facebook Gaming: Watch, Play, and Connect. The app marks Facebook's most significant move into the video game segment coming at a time when people are stuck indoors due to the coronavirus and looking for ways to relax. The app is offered at no cost and is designed for creating and watching live gameplay allowing Facebook to battle directly against Twitch, YouTube, and Mixer.

The Facebook Gaming app was supposed to launch in June, but Facebook launched early to take advantage of the hordes of people around the country, and the world, who are stuck at home. The person in charge of the Facebook app is Fidji Simo, who reports directly to Mark Zuckerberg. Simo says that gaming investments are a top priority for Facebook because the social network sees gaming as a type of entertainment that connects people. Simo says gaming isn't just passive consumption, it's interactive and brings people together.

Gaming has been significantly growing during the quarantine, with the entire segment booming right now. The New York Times says the Facebook Gaming app was tested in Southeast Asia and Latin America for the last 18 months. Currently, the app is available for Android devices via Google Play. Facebook intends to launch the app for iOS devices once Apple approves it.

It's certainly not guaranteed that Facebook Gaming will be a popular app as it faces some stiff competition. Other apps that Facebook has launched in the past have failed, such as Facebook Camera and Facebook Paper. However, gaming has a much broader appeal than those other apps could have ever hoped for. Facebook has found some success with streaming video game content already. Currently, Facebook does very well for those who enjoy watching gaming content, sitting in third place behind YouTube and Twitch, according to Streamlabs.

Facebook previously streamed gaming content using the official Facebook app. However, the dedicated gaming app will support gamers sharing streams to their personal Facebook pages, and a function called "Go Live" makes it very easy for streamers to share their gaming action to Facebook by pressing couple buttons. Facebook Gaming is said to be much easier to use than Twitch, and the app has no advertising for now. Streamers can earn money when viewers send them stars, and Facebook will take a cut of that money as a commission. Additional ways to make money will be added to the service in the future.

It's nice to see something with a positive connotation associated with the social networking giant; typically when we talk about Facebook, it's due to some sort of privacy issue such as the recent undisclosed data sharing between it and Zoom.