One of the earliest lessons everyone should be taught is that if something is too good to be true, then it probably isn't true. Lest anyone need a reminder of this old adage, just head over to Amazon and look up what sellers are claiming to be 16TB external solid state drives at insanely low prices—some of them go for under $100. Or at least they did before Amazon removed them. These are not legit SSDs, as a recent examination has confirmed.
While some of the sub-$100 devices claiming to offer 16TB of external SSD storage have been removed, others remain at equally unrealistic prices. We found one selling for $119.99, with specs touting USB 3.1 Type-C connectivity, and another for a more tantalizing $109.99 price. We also found several supposed 11TB models.
Savvy users know that getting these capacities at such low prices is unrealistic,  but what about the general user that goes shopping for a portable drive? It's easy to get tricked—one of the 16TB models we viewed boasted a five-star rating out of 93 reviews, and while sold by a marketplace seller, the order is fulfilled (shipped) by Amazon. You can find actual storage deals on Amazon, but this isn't it. 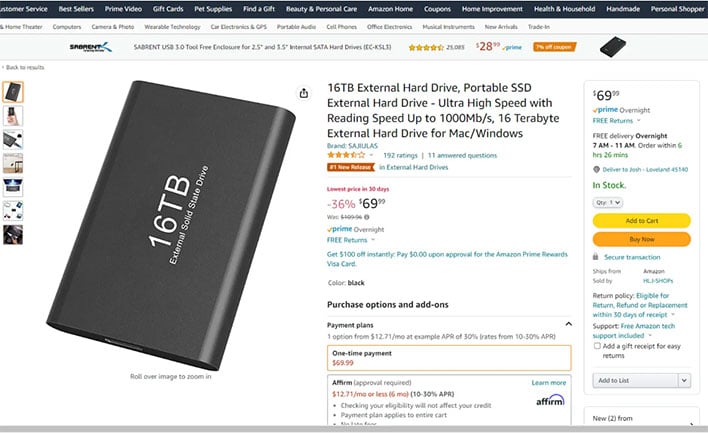 "I LOVE this... it is my favorite storage device," a user named wrote. Another exclaimed, "Good product, good price," with a thumbs-up emoji. These users have oddball handles, such as "ngqxw pugrf" and "Alhawraa," in these two particular instances.
Confirming what we already know about these listings, Josh Henderickson at ReviewGeek picked up a portable driving that claimed to offer 16TB of USB 3.1 M.2 SSD storage for the low price of $69.99. He then ran some tests and tore it down to find out what it actually is, as opposed to what had been falsely advertised.
It took an hour to fill the drive with 64GB of data. Not only did the drive not live up to its speed claim, it also fell well short of the advertised capacity at just 64 gigabytes (equivalent to 0.64TB) versus 16 terabytes (equivalent to 64,000GB).
He then embarked on a physical teardown, noting that the manufacturer left out any seams or screws, or obvious points of access. Clearly the manufacturer didn't want people opening this thing up. Undeterred, he cracked it open and discovered a 64GB microSD card fitting into a circuit board acting as a USB-C adapter.
"Why does Windows show a 16TB drive, then? That’s likely a part of the board’s firmware, falsely reporting a size that doesn’t exist. This thing is a total lie, from top to bottom," Hendrickson states.
So to recap, these fraudulent listings advertise fake speeds and capacities at unrealistic price points, some of them are shipped by Amazon with Prime shipping, and some of them have five-star ratings and glowing and reviews. But what you actually get is a much smaller capacity microSD card masquerading as a portable SSD that's been tuned to trick Windows into reporting a higher capacity, for a price that is too good to be true.
Hendrickson reached out to Amazon after his teardown to see what the retailer had to say on the matter.

"We do not allow product listings to be taken over or incorrect information to be listed, and we have zero tolerance for fake reviews. We have clear policies that prohibit reviews abuse, and we suspend, ban, and take legal action against those who violate these policies and remove inauthentic reviews. The items in question did violate our policies and they have been removed," Amazon said.
That's well and good, and kudos to Amazon for removing the specific listing in question (an off-brand WIOTA drive), but there are still several other listings that are obvious fakes.
If you're looking for a portable SSD, there are plenty of legitimate products from name-brand companies. Unfortunately, you won't find anything close to 16TB for $100, but at least you won't get scammed. Here's a look at the top 10 best-selling models on Amazon... 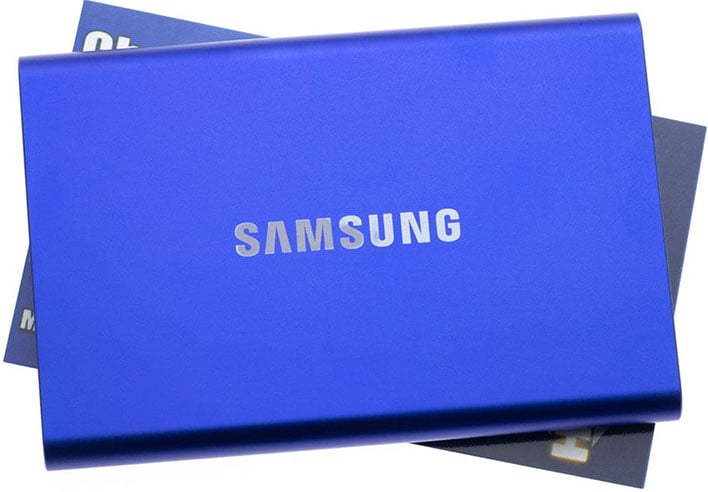 Samsung's T7 SSD is an excellent option and can be had for $94.99 for 1TB on Amazon
As you can see, you can expect 1TB of portable SSD storage for around $100. The bang-for-buck improves a bit at higher capacities, such as 2TB for around $160, which works out to $80 per terabyte. Additionally, we have a review of the Samsung T7 SSD, which is an excellent option.
Whether it's a high-capacity storage drive or something else, the same advice applies—do your research and be wary of unrealistic prices.