There is approximately one month left of Destiny 2’s Season of the Splicer. While there is plenty of content and activities left in the season, many players have begun to wonder what the next season will bring. A few leaks have appeared here and there on the Internet that may hint at Season 15's content. Dataminers have recently discovered a piece of Exotic Armor that may appear in Destiny 2’s Season 15.

Well-known dataminer “Ginsor” tweeted the simple phrase “Thermobaric Greaves.” According to the Merriam-Webster Dictionary, “thermobaric” means “containing a charge of fuel designed to ignite and combine with oxygen present in the atmosphere to produce a prolonged explosion.” The blast wave that is produced by a thermobaric weapon typically lasts longer than the blast waves from other explosives. Our best guess is that “Thermobaric Greaves” will likely allow Guardians to release occasional but more powerful grenades or similar explosives.

The Exotic Armor will likely be Legs and the name “Greaves” suggests that this will be a Titan Exotic. Titans are also able to use “Peregrine Greaves” which allow them to “increase the amount of damage that Shoulder Charge can do in mid-air.” The concept of Legs that could produce larger grenades or another kind of explosive feels appropriate for Titans, given the nature of their class. 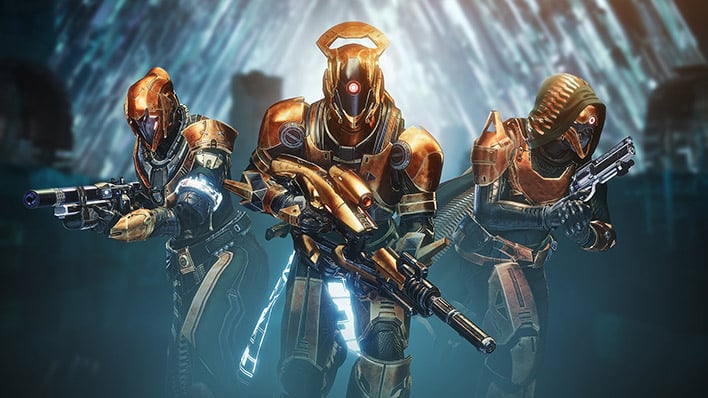 We would also guess that “Thermobaric Greaves” will drop from Legendary and Master Lost Sectors. Legendary and Master Lost Sectors were introduced this past fall during the Season of the Hunt. Guardians who complete these Lost Sectors by themselves have a chance at receiving a piece of exclusive Exotic Armor. There is one Legendary and one Master Lost Sector each day. The tooltip bar indicates what kind of Exotic Armor the Guardian can earn from each of them. Guardians who have already received the exclusive Exotic Armor may get a better roll on said armor or may receive something else after multiple runs. For example, Warlocks who already have the Necrotic Grip Exotic Gauntlets may get a better roll or may get another Exotic entirely during an “arms” day. They may also receive no Exotics at all, although Bungie has seemed to improve the overall drop rate.

There were six pieces of new Exotic Armor when the Legendary and Master Lost Sectors were first released. However, Bungie has added three new Exotic Legs during Season 14. These are the Titan The Path of Burning Steps, the Warlock Boots of the Assembler, and the Hunter Star-Eater Scales. It is therefore likely that they will continue to add new Exotics to encourage players to farm the Legendary and Master Lost Sectors.

This is naturally all speculation. Bungie has not yet confirmed whether the “Thermobaric Greaves” exist or anything about the activities or storyline of the upcoming season. We are sure we will learn more about Season 15 in the coming weeks.