Destiny 2 Harbinger Mission: Here's What You Need To Know, Plus A New Hotfix

Destiny 2 players have been itching to get their hands on the random rolls and catalyst of the new Hawkmoon Hand Cannon. The new Harbinger mission now finally provides players the opportunity to earn the catalyst and farm for Hawkmoon. We have provided everything you need to know about the Destiny 2 Harbinger mission as well as several important hotfixes that were introduced this past week.

What is the Harbinger Quest?

The Harbinger quest is a repeatable mission that gives Guardians random rolls on the Hawkmoon exotic hand-cannon and the catalyst for it. Guardians were able to acquire Hawkmoon earlier this season, but had been told by Bungie that random rolls would be coming soon. Guardians will be able to launch into the mission from the EDZ map after they have completed it for the first time. Otherwise, they will need to find a secret passage on the EDZ to access the mission.

Guardians can also pick up the Bird of Prey quest from the Crow in the Tangled Shore to eventually get the Radiant Accipiter ship. They will then need to collect Feathers of Light from the Harbinger mission over the next couple of weeks. Some of these feathers can be collected from the minibosses and bosses in the mission, while others are found in random locations. It is currently unclear what the final step of the quest is and it is unlikely Guardians will find out until the end of the current season. 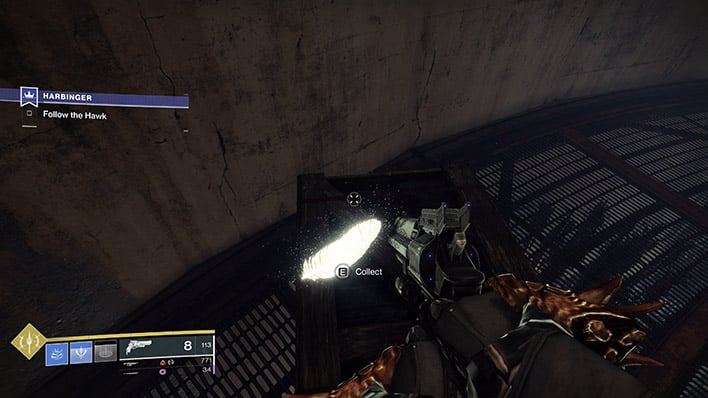 How to Prep for the Harbinger Quest

The Harbinger mission is long and the recommended power level for the mission is 1270. The mission is therefore about as challenging as the Legend and Master Lost Sectors and is certainly longer than them. There is a Triumph for completing the mission solo, but we would recommend assembling a fireteam of three for your first attempt. You will need Hawkmoon to access the mission, but you do not need to use the weapon to complete the rest of it unless you are going for a Triumph.

Guardians will encounter Unstoppable Champions and enemies with energy shields. We would therefore recommend that at least one Guardian on the fireteam equip a Hand Cannon and that each Guardian have a variety of energy and power weapons that can take down the energy shields. We personally encountered quite a few Void shields and a handful of Solar and Arc shields. 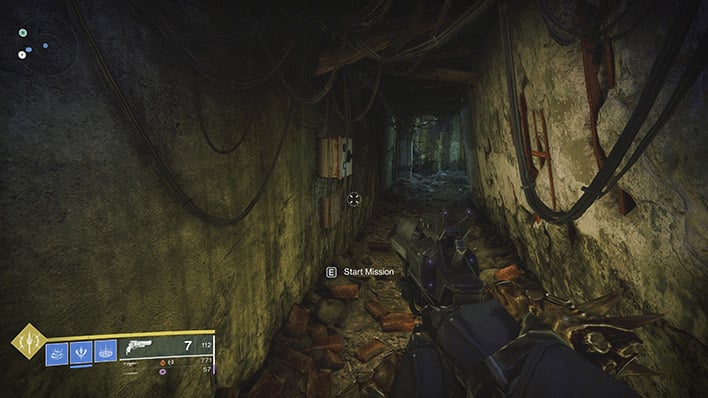 Guardians who are completing the mission for the first time will need to first land in the Trostland on the EDZ. You should then head toward a run-down building that will be toward the right of the church. There is a broken fireplace on the second floor of this building. Shoot the fireplace opening until it explodes and it will reveal a hidden passageway. Interact with a box on the left side of the passageway to officially start the mission. 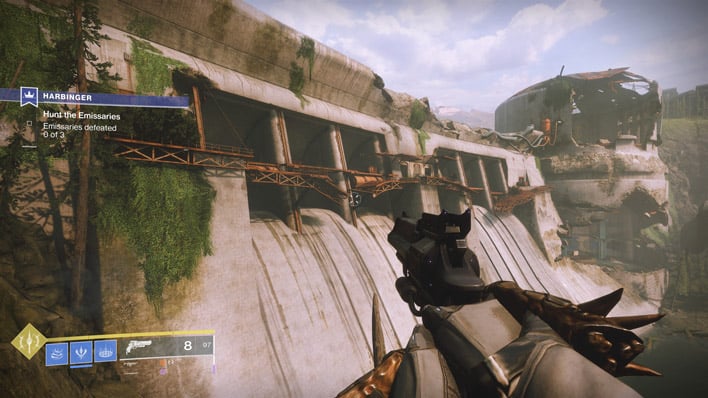 It would not be a Destiny 2 mission without a jumping puzzle and Harbinger is no exception. You will want to kill the Taken Hobgoblin that is hanging out on a ledge ahead you before preceding. You should then jump onto the ledge that the Hobgoblin was on.

You will want to meticulously inch along this cliff until you see a fallen tree pointing toward the dam. You should carefully jump onto the tree and look towards the dam. You will see a row of pipes and a thin edge of concrete toward the bottom of the dam. You will need to jump onto this edge and walk towards the middle of the dam. Look upwards once you reach the midpoint of the dam. There will be a few lips of concrete that you can jump on that will take you to a rusty metal platform. There is a small opening under the platform that will take you to the next part of the mission.

Follow the path until you reach a large, open room. This room, and its surrounding smaller rooms, will feature the Emissaries and other Taken enemies you will need to kill. The Emissaries will run-away once you have gotten their health down. You will need to find the rooms blocked by Taken orbs and break those orbs to finish off the Emissaries. 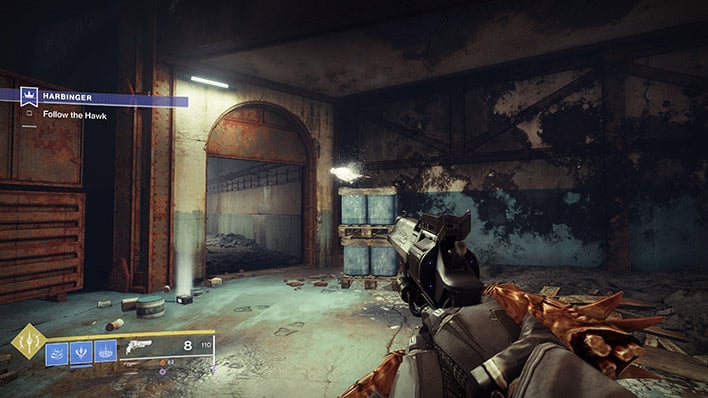 Once you have killed all three Emissaries, you should return to the large, open room. You will see a silvery Hawk above one of the doorways. This path will lead to the boss room that is featured in the Lake of Shadows strike.

The next stage of the mission is to simply survive the onslaught of enemies. These enemies will include Unstoppable Champions, enemies with energy shields, and some sharp-shooting Taken Hobgoblins. You will be able to follow the Hawk and proceed with the next part of the mission once you have killed all of the enemies.

The Hawk will lead you to a path that was part of the original Hawkmoon mission. You will need to jump around and follow the path to make it to the final boss. You should find and follow the rows of purple mushrooms if you lose your way. 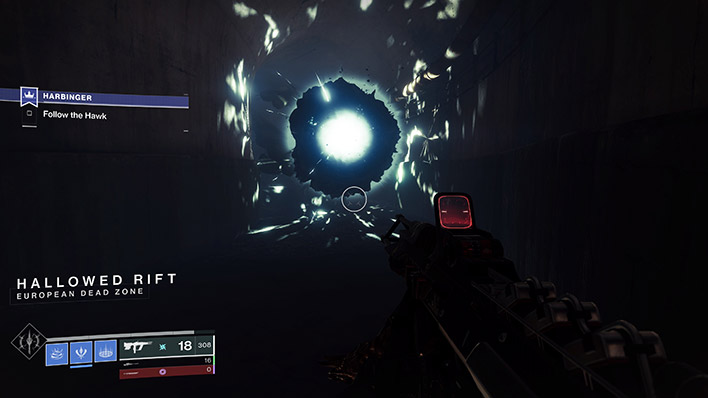 You will eventually land in the room with the Shard of the Traveler. This is where the final boss will spawn and a plethora of other enemies. A wave of enemies will spawn every time you take down one bar of the boss’s health.

We would highly recommend using longer range weapons such as sniper rifles or machine guns. This would be a good time to pull out something like Cloudstrike. The boss deals a ton of damage and the Taken Knights and Taken Acolytes are no joke. Once you have finished off the boss, you will be rewarded with the Hawkmoon catalyst and random rolls. Our random rolls included “Surplus.”

The Harbinger mission is an exciting addition to the game, but several hot fixes of note were also introduced yesterday. First, the Cold Front Submachine Gun will no longer include the Dragonfly perk and instead will feature Swashbuckler. Cold Front was reintroduced during the Dawning event and players could farm for various rolls. Players were surprised when Dragonfly was included as a perk. Dragonfly allows weapons to create explosions on kills. It is typically available on energy weapons and not on kinetic weapons like Cold Front. Swashbuckler permits increased damage from melee kills and kills with this weapon and is a more natural fit for a kinetic weapon.

Bungie has also fixed an issue where players were receiving armor with low stats from the "Coup de Grace" Celebrant Hunt. Players were supposed to receive armor with high stat rolls, but many were not. There is now a greater chance that players will get the promised armor.

Will you be taking on the Harbinger mission? What do you think of random-rolls on exotic weapons? Let us know in the comments below.