It is the holiday season which means that seasonal video game events abound. Destiny 2 is no exception and players have been grinding through the Dawning 2020 event. Unfortunately, progress for this event has been quite slow. Destiny 2 developer Bungie has therefore tripled Dawning Spirit rewards for the community “Share the Dawning Spirit” quest.

The Dawning 2020 event is similar to previous Destiny 2 holiday events. Players must use Eva Levante’s oven to bake cookies for NPCs. There are two Dawning quest lines this year-- “Share the Dawning Spirit” and “And To All a Good Flight.” “And To All a Good Flight” is an individual quest which rewards players with the Starfarer 7M ship and upgrades. “Share the Dawning Spirit” tasks players with delivering a handful of cookies and raising “humanity’s Dawning Spirit.” It is a community quest in which all Destiny players are expected together to generate 1,000,000,000 Dawning Spirits. The event ends on January 5th, 2021 and it has been clear to many that players were not going to generate enough Dawning Spirits by that date. Players quickly finished the first few stages of the quest, but progress has considerably slowed down. Bungie's latest update is intended to help players hopefully reach the event goal. 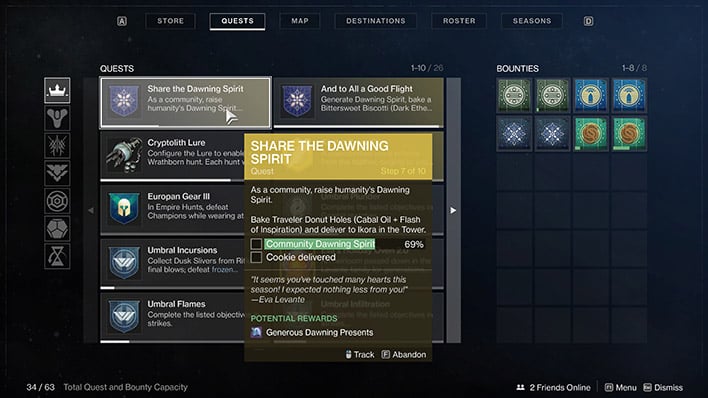 Why have Destiny 2 players been unable to reach the Dawning Spirit goal? Players have been frustrated and underwhelmed by this year’s Dawning. Baking and delivering the same cookies year after year with limited rewards can be rather tedious. The new legendary Glacioclasm Fusion Rifle is fine, but nothing to write home about. The other weapons and sparrows are repeats from years past. At the moment, we do not know what the final reward for the quest will be. One of the rewards for clearing a stage was a gag gift that has no use. Players have simply therefore been unmotivated to grind for an unknown reward.

There are also very few ways to generate Dawning Spirit. It is primarily generated through delivering baked goods, completing Dawning bounties, using the Starfarer 7M ship, and claiming Dawning triumphs. Players have been very vocal about their dislike of bounty-driven events. Bungie has stated that they will be making future changes to the Destiny 2 bounty system, but these changes have yet to be implemented. It is understandable that Bungie has not had the time to make drastic changes to seasonal events this year given the release of Beyond Light and the challenges created by the ongoing health crisis. However, players are burnt-out on bounties, especially bounties that provide little reward. Let’s hope that Dawning 2021 will bring in some fresh content.

Tags:  Bungie, destiny 2, destiny 2: beyond light
Show comments blog comments powered by Disqus
Follow Us:
What Are You Playing Now?