Destiny 2 Season Of The Chosen: A How-To Guide For The Dead Man's Tale Presage Mission

Destiny 2’s Season of the Chosen is well under way and players can already access a new exotic weapon. Dead Man’s Tale has thankfully dropped earlier rather than later. Here is everything you need to know about Dead Man’s Tale and the Presage Mission. **Warning: Major Spoilers Ahead**

What is Dead Man’s Tale?

Dead Man’s Tale is an Exotic Scout Rifle. Its exotic perk is “Cranial Spike” with which “chaining precision hits grant bonus damage and quickens reload speed.” This perk makes the weapon more useful against bosses and powerful enemies, and is fun to use once you get on a precision hit roll. There is also a slot for a catalyst, but that catalyst has not yet been made available. Like the last Destiny 2 exotic Hawkmoon, Dead Man’s Tale has a random roll perk column. Guardians can run the current exotic mission after their initial playthrough as many times as they like to try to get their desired roll. 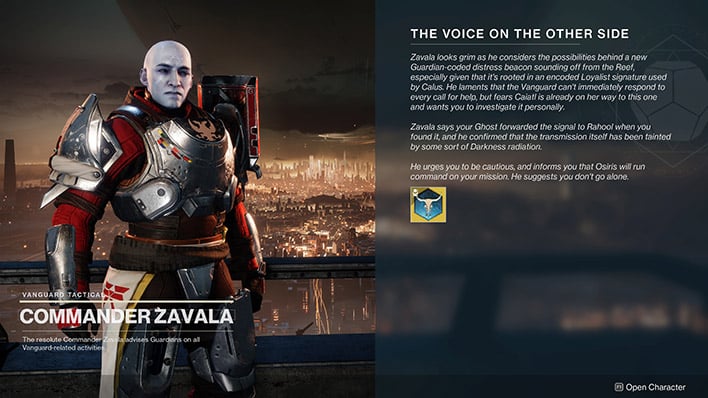 Find the Distress Signal and Unlock the Mission

Guardians should first launch into the Arm’s Dealer Strike from the EDZ map. The Arm’s Dealer Strike does not need to be accessed from the Strike Playlist or as a Nightfall, though both of those options can work as well. Guardians will want to kill the first batch of enemies as usual. Afterwards, head to a now-open door on the right side of the room instead of preceding to hack the usual door. Guardians will encounter several turrets before finding themselves on a landing platform. Go to the crate on the top right to obtain a distress signal. 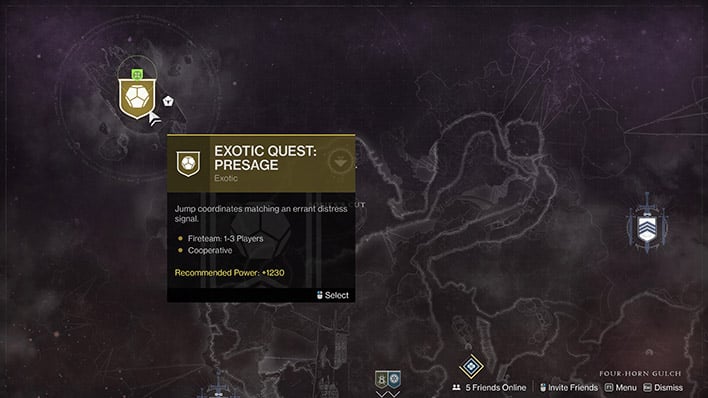 The next part of the quest is not difficult to find. Guardians will find a node for the Presage mission on the map of the Tangled Shore. Click on the node to be launched directly into the mission.

There are a couple of things to note. First, the Presage Mission is a 1250 activity. The activity is doable if you are a lower level and the mission forces you to be under level no matter what. The screebs you encounter are going to hurt.

Second, although you can solo the mission, we would recommend completing the mission the first time with a friend or two. Commander Zavala even recommends doing so. The extra people will be especially useful during the final boss battle. 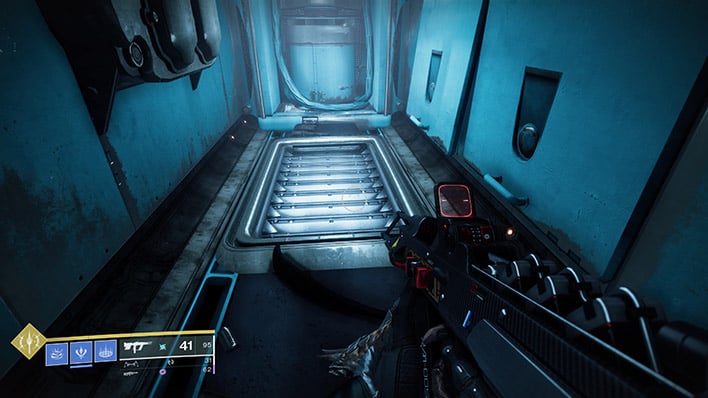 Explore Outside the Ship and Worm Your Way into a Maze

The mission starts outside of the ship on a landing platform. Guardians will not be able to enter the ship from the front door. Instead, look left and follow a series of platforms. This first section is rather reminiscent of the space walk during the Deep Stone Crypt Raid. The platforms will lead the Guardian to a small entrance into the ship.

Guardians will then need to complete the first “maze” of the mission. The maze is not complicated but Guardians will want to watch out for vents that can be shot to create a new passage. The maze will end with the Guardian jumping onto the other side of the locked door. Guardians can then pull the lever to unlock the door and give themselves a quick entrance in case they die and land on the other side of that door. 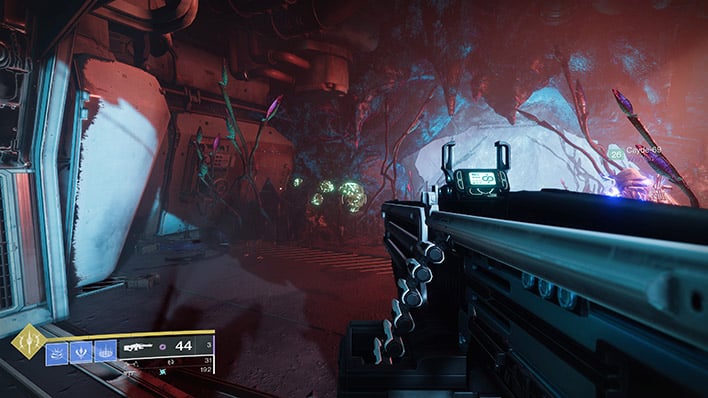 Guardians will then come face to face with a large glowing spore and a translucent wall of dust that will kill the Guardian if they come too close. Hit the spores either with your melee attack repeatedly or several shots from your chosen weapon to receive a buff called the “Egregore Link.” This buff will allow the player to pass through the translucent wall without being harmed. The buff only lasts about fifteen seconds so Guardians will want to move quickly. One thing to note is that other Guardians will receive the buff if they are standing near the spore when the buff activates. However, if they are too far away, they will need to wait for the buff to reset. 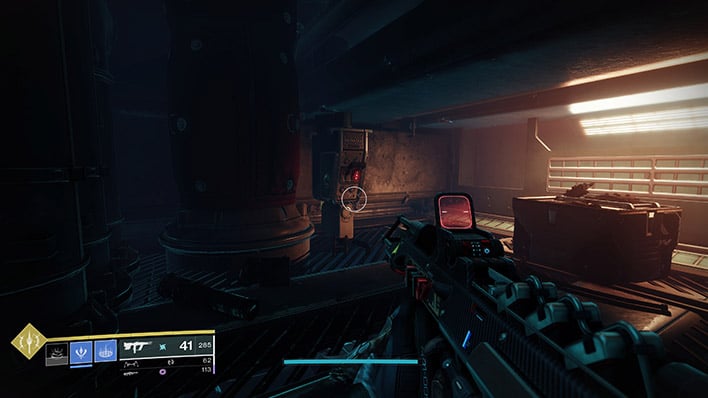 The next part will set the tone for the remainder of the mission. Guardians should explore the surrounding area to find levers that can be activated or glowing blue nodes that can be shot. These levers and nodes will activate various doors to allow the Guardian to access more glowing spores. These glowing spores will enable the Guardian to safely pass through more rooms. Guardians will also need to kill Scorn along the way, including some particularly strong screebs. There is nothing in the mission to guide the Guardian to these various levers and nodes. They are not difficult to find, but Guardians should keep an eye out for them.

Guardians will complete a series of these tasks multiple times before coming to the end of the room past the electric fences. There will be a door at the bottom of the room. Head through the door but make sure to jump once or twice before landing. A straight fall to the bottom will kill you. 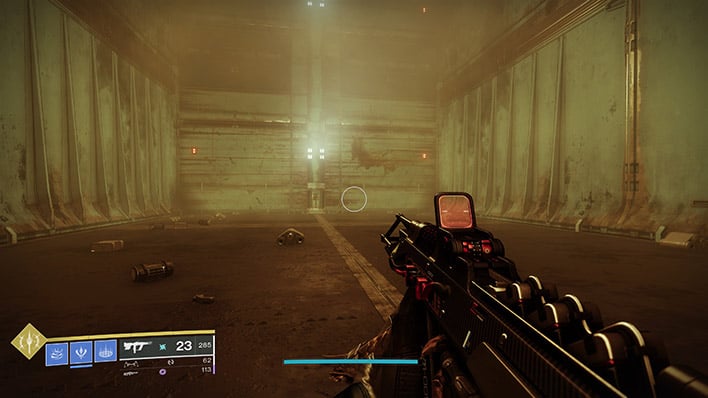 “Into the garbage chute, flyboy!”

This part of the mission will be familiar to anyone who has seen Star Wars: Episode IV- A New Hope. Guardians will find themselves in a trash compactor and will need to pull a lever to activate it. The trash compactor will begin to close in as a horde of Scorn spawn into the room. Kill the Scorn and begin shooting the vents that are on the bottom of the ground. There will be three blue glowing nodes hiding beneath them. Shoot these blue glowing nodes to reveal a secret passageway on the floor that will glow red. Jump into this passageway or you will die. This passageway will send Guardians through a vent system and lead them to an outside platform.

Guardians who die will be spawned into the room above the trash compactor. The Scorn here thankfully do not respawn. This part of the mission is much easier to complete without also having to worry about the Scorn. 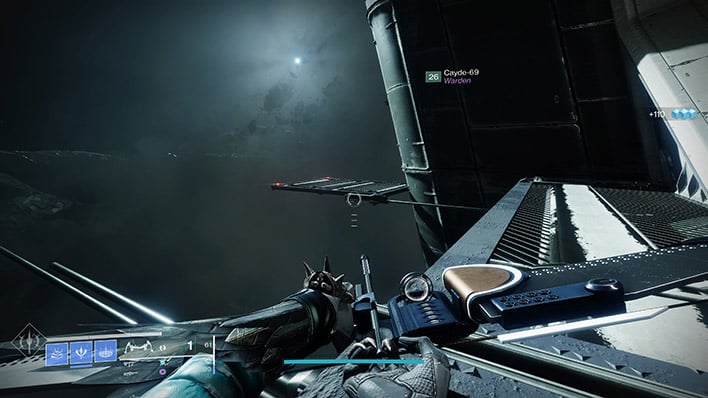 Defeat Scorn and Find Your Way Through the Second Maze

Guardians will encounter a large group of Scorn in a hangar. This fight is pretty simple and no special directions are needed. We recommend focusing on the Abominations as they will do the most damage.

Guardians should jump on a platform on the left side of the room once the enemies are dead. This will lead Guardians to another maze that is very much like the first. Guardians will need to pull levers, shoot blue glowing nodes, obtain the “Egregore Link” from spores and traverse various parts of the ship to make progress. There will also be quite a number of Scorn to kill along the way. Many of the Scorn tend to spawn once the buff has worn off.

This maze includes a platform room in which Guardians will need to shoot multiple spores in sequence to retain their buff. There will be a door at the end of this room blocked by a translucent wall of dust that will lead to the boss fight. 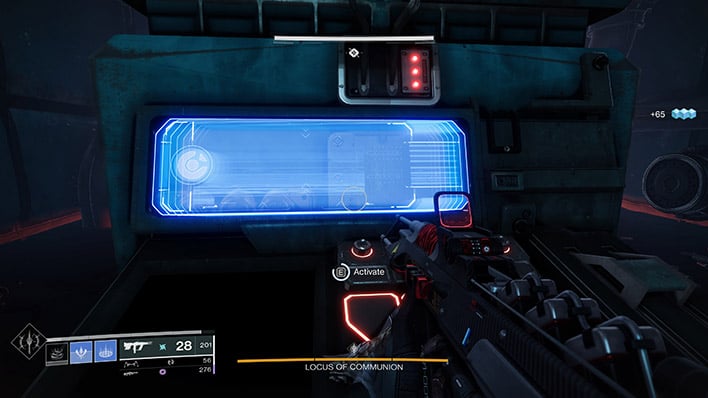 Guardians will walk into a two-level room. The lower level will be too hot for the Guardian to survive and can only be cooled down by activating three levers on the upper level. There are two levels on either side of the narrow room and one lever in a room in the middle of the upper floor that is also quite hot. The first two levers are easy to activate but Guardians will need to move quickly to activate the third lever. The Boss will first spawn on the upper level and move to the lower level once some of its health has been depleted. There will be three holes on either side of the room and opposite of the lever room that the Guardian can jump down through to reach the lower level.

The final boss battle consists of a dance of jumping between the two levels to shoot the boss, waves of other enemies, and activating the levers when the bottom floor gets too hot. Guardians will need to complete these actions several times before the boss is defeated. At that point, a door will open up on the left side of the room. This door and passageway will guide the player to who sent out the distress signal. Dead Man’s Tale will be in this room and the mission will end once Guardians obtain it. 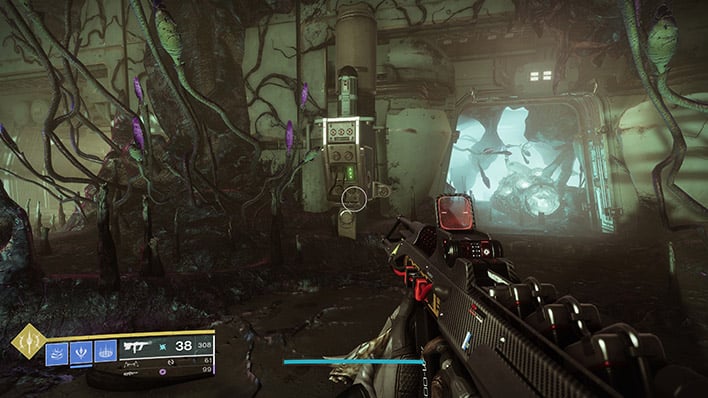 Final Thoughts on the Presage Mission

The Presage Mission is overall fairly straightforward. There is nothing too secret or too difficult in the mission to deter Guardians from completing it. This makes Dead Man’s Tale a perfectly farmable weapon.

We personally enjoyed the overall vibe of the mission and especially loved the trash compactor portion. The two mazes were a bit repetitive but were not so long that they became annoying. Our main gripe with the mission is that it is fairly easy to break. There are several hidey-holes in the mission that are a little too easy to access that allow the player to break out of the map. These holes will hopefully be patched in the future.

Have you attempted the Presage mission? Let us know what you think of the mission and Dead Man’s Tale in the comments below.