The desktop PC market took it on the chin in the first quarter of 2022, as excess inventory and normal seasonal downturns jointly contributed to a steep drop in x86 CPU shipments. The steepest, in fact, from one quarter to the next—desktop CPU shipments plummeted more than 30 percent, marking the "worst quarterly desktop CPU shipment decline in history."
Dean McCarron from Mercury Research shared the latest shipment data, which while appearing dire at first glance is actually not all bad. Despite the notable downturn, McCarron says the market set several records, including highs for server processor revenue and IoT/semi-custom units and revenue. Additionally, chip makers and designers benefited from a record high ASP (average selling price) of combined client desktop and notebook CPUs. Hence AMD recently posting a monster quarter.

"Lower shipments of low-priced entry level CPUs and strong ramps of new mobile processors (Alder Lake CPUs for Intel and Barcelo and Rembrandt CPUs cores for AMD) resulted in much higher mobile CPU prices, which helped set the record client (combined desktop and notebook) average selling prices of $138, which were up more than 10 percent on quarter and more than 30 percent on year," McCarron says.
This helped both AMD and Intel weather historically steep declines in desktop CPU shipments during the quarter. Additionally, because AMD's shipments declined at a lower rate that Intel's, it managed to further chip away at its rival's market share lead.

Looking at overall x86 CPUs (client CPUs and servers, IoT, and semi-custom products like those used in gaming consoles), AMD narrowed the gap by a few percentage, claiming a 27.7 share of the market. That's the highest it's ever been for AMD, which in the previous quarter had also set a record at at 25.6 percent. Prior to that, you have to go back more than 15 years for the last time AMD broke a record.

What Boutique PC Vendors Have To Say About The Shipment Decline

Part of the difficulty in parsing this kind of data is there is no way of knowing if the data mostly reflects general purpose PCs and business machines, or if gaming PCs and prebuilt enthusiast desktops are being hit as well. So, we reached out to a couple of boutiques to see what they had to say on the matter. 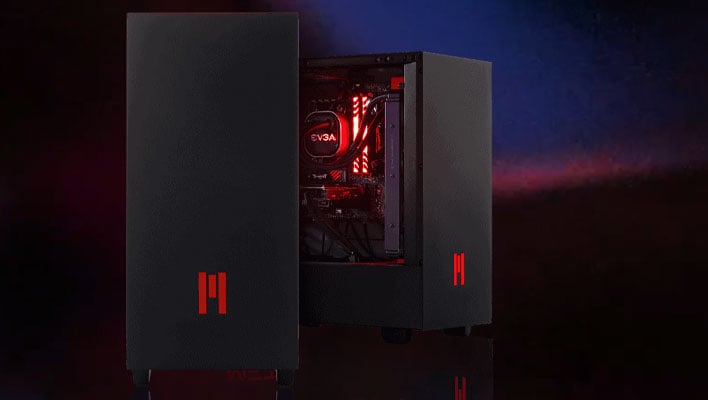 Zack Shutt, CEO and founder of Meta PCs (who came up with the name before Facebook pivoted to Meta), said the "enthusiast space continues to grow" contrary to the desktop PC market over all. From his vantage point, it's because "higher end components such as desktop GPUs are starting to make their way ito the channel and we're beginning to see some decent availability for the first time in what seems like forever."
This has translated into a "large influx of gaming PC purchases from new customers who have been patiently waiting for availability and pricing to approach more reasonable levels." He added, "We're hopeful it's a positive indicator of what lies ahead for the remainder of 2022."
To his point, we've written about desktop graphics cards finally coming down in price and being more readily available. We've even seen some cards drop to MSRP (or even below), which before recently was unheard in the past couple of years.

Even so, custom PC builders have not been immune to the market trend as a whole. We also spoke with Falcon Northwest founder and CEO Kelt Reeves, who said the "sharp and sudden drop this spring" is from a combination of factors, including "the global economic conditions, war, inflation, high component prices, and a stock crash."
The most interesting thing he had to say, however, was how the rumor mill can affect sales. As it relates to gaming PCs like the Talon we reviewed last year, he points out that "enthusiasts know new GPU generations are the watershed events in our industry, and have become much bigger drivers than even new operating system launches used to be."
Falcon Northwest is an OG in the boutique space, having helped pioneer the category when Reeves founded the company in 1992. Like the Farmer's Insurance commercial, he knows a thing or two because he's seen a thing or two. And what he's seen is a shift in media coverage of "super-early silicon being tested in a lab somewhere that used to be reported only in obscure."
"To read many of the [mainstream] headlines you’d think new GPUs would be any day now. But while I don’t know much more about the schedules and can’t say what I do know, I fear this false narrative that the next generation is almost here is going to depress high-end component sales for far longer than anyone would like," Reeves said.
We fall into the mainstream news category and, as pointed out, cover interesting rumors as we spot them. To his point, we rarely advocate playing the waiting became, because something newer, faster, and shinier is always around the corner. And to that end, it's an intriguing observation that the waiting game can, at times, affect boutique PC sales.
Incidentally, Digitimes reports that ASUS expects its PC shipments to drop 10 percent this quarter, and also its motherboard and graphic card shipments by at least as much and as high as 15 percent. The reasons mentioned echo some of what Reeves pointed out as contributing factors.