Have you heard about the death of PC gaming? It was a popular topic among certain folks for years. They haven't said much about it lately, though—probably because PC gaming is bigger than it has ever been. Year-over-year growth has been immense, with gaming monitor and gaming PC shipments in the second quarter increasing 19.3% over last year despite shipping delays and component shortages.


Market analysis firm IDC itself notes that the rapid growth in the gaming market through last year and into this year was driven by the global COVID-19 pandemic, and that some analysts expect this growth could fall off as fear of the virus abates. IDC doesn't think that will be the case, though. 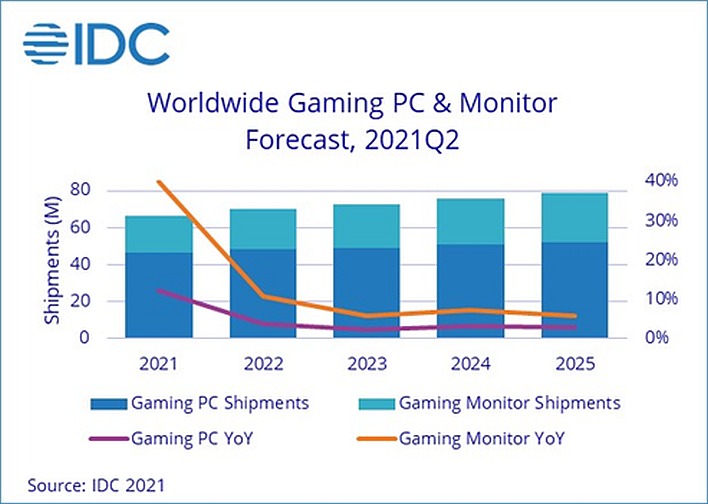 The latest forecasts from IDC project that this growth will continue, albeit much more slowly, over the next five years. The data-tracking group suggests that the PC gaming market, comprising gaming PCs and gaming monitors, will grow from $43 billion last year to over $60 billion by 2025. That's a five-year compound annual growth rate of 7.4%.

IDC expects monitors to grow more than PCs, which makes sense. The firm says that it expects gaming PC shipments to rise by only 4.8% yearly through 2025, while monitor sales might grow much more rapidly, at 13.2% annually. This is despite the average sale price (ASP) expectations IDC shares; it forecasts that the current $925 ASP of gaming PCs will rise to $1007 by 2025, while gaming monitors, currently going for $339 on average, could drop to $309 as a mean price by 2025.