Buying a memory kit is all about timing, and we're not talking latency settings. We're talking about pricing and the volatility of DRAM, as it's particularly sensitive to constantly changing market conditions. Fortunately for consumers, DRAM pricing is on a downward spiral and, if the market analysts at TrendForce are right on the money, both DDR5 and DDR4 are due for a big price drop in the coming weeks.
More specifically, DRAM is projected to plummet by 13-18 percent in the fourth quarter, which begins at the end of next week. This is due to what's been described as "a significant decline in memory demand" and buyers ultimately delaying purchases of new RAM.
"In terms of PC DRAM, due to weak demand for notebooks, PC OEMs will remain focused on destocking DRAM inventory. While the DRAM supply side has not actually reduced production since operating profit remains favorable, bit output continues to rise and pressure on suppliers' inventory becomes increasingly obvious," TrendForce explains. "From the perspective of DDR4 and DDR5, the price drop forecast in 4Q22 is 13~18 percent with DDR5 declining more than DDR4." 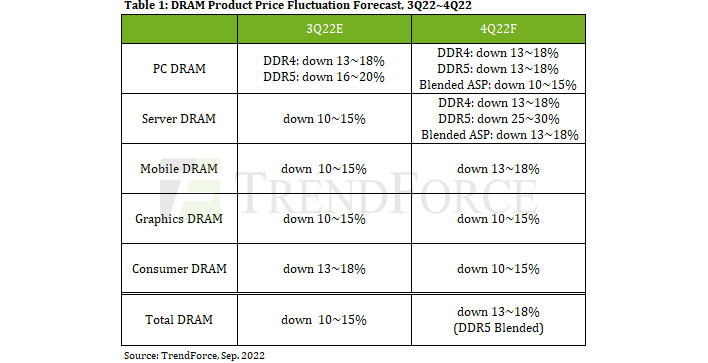 This is good news for consumers at large, but especially those who plan on building a PC around AMD's Zen 4 platform. It's DDR5 memory or bust with AMD's next-generation Ryzen 7000 series CPUs and socket AM5 motherboards. Likewise, Intel's Alder Lake CPUs support DDR5, though users can alternatively opt for DDR4 if they prefer—and choose the right motherboard.
Also as it applies to DDR5 memory, the unmentioned upshot is that buying a faster RAM kit could be more feasible, depending on how the market actually shakes out. This is already the case to some extent. For example, this 32GB Kingston Fury Beast DDR5-6000 kit was selling for $354.99 just a few months ago and is now down to $213.01 on Amazon. And here's a 32GB Corsair Vengeance DDR5-6200 kit that commanded $336.84 as recent as mid-August and is now listed at Amazon for $269.99.
These aren't cheap kits, but if they end up falling by 18 percent, you'd be looking at around $175 and $221, respectively. Meanwhile, some 32GB DDR4-4000 kits are going for a little over $100 (like this Patriot Viper Elite II for $104.99 at Amazon) and could end up below a Benjamin if the price drop prediction ends up being accurate.