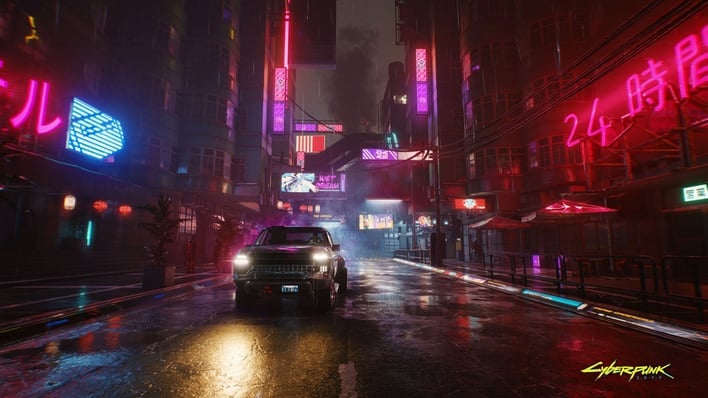 The refund situation over regarding Cyberpunk 2077 is starting to get a bit murkier... at least if you bought the PlayStation 4 version of the game. Earlier this week, developer CD Projekt Red (CDPR) addressed the controversy over poor performance, numerous bugs, and horrible graphics on previous generation consoles by telling customers that they could request a refund.

"We'd would appreciate it if you would give us a chance, but if you are not pleased with the game on your console and don't want to wait for updates, you can opt to refund your copy," said CDPR in a tweet on Monday. "For copies purchased digitally, please use the refund system of PSN or Xbox respectively."

CDPR doubled down on that train of thought yesterday during a conference call. "Anyone who has purchased any title on the PlayStation network or the Microsoft storefront can ask for a refund," said CDPR's Marcin Iwiński. "And if it’s made within certain boundaries, usually related to time, usage and so on, can ask for that refund. Our procedure here with Microsoft and Sony is not different than with any other title released on any of those storefronts."

Unfortunately, while it still does seem to be the case that Xbox One customers have 14 days from time of purchase to request a refund, Sony customers aren't so lucky. CNBC reporter Steve Kovach is unfortunate enough to have a PlayStation 4 and to have bought Cyberpunk 2077. Like everyone else out there in the same predicament, he's been saddled with constant crashing and other calamities that make enjoying the game damn near impossible. So, he took CDPR's advice of contacting Sony to ask for a refund, and was met with immediate pushback.

Sony won't refund my Cyberpunk 2077 order, even after the game's developer said buyers experiencing problems could get refunds. The game literally crashes my PS4 and is unplayable. Sony's answer? Wait for the updates. pic.twitter.com/Zx2LSRhqqN

Instead of granting the refund, as is possible for disgruntled Xbox One gamers, Sony sent back a canned message that in a nutshell says "Not our problem":

CD Projekt Red is currently working on patches and updates to fix bugs and crashes, and to improve overall gameplay experience of Cyberpunk 2077

So, Kovach (and countless other PlayStation 4 gamers) did just what CDPR asked, and was rebuffed. If we hop over to Sony's official FAQ for PlayStation Store refunds on “Games and Add-ons”, we find this entry:

After purchasing this type of content through PlayStation Store, you have 14 days from purchase to request a refund. If you have started to download or stream the purchased content you will not be eligible for a refund unless the content is faulty.

Although Kovach and other gamers would like to believe that the "faulty" language would apply to a bug-riddled mess like Cyberpunk 2077, it only appears to apply to issues on Sony's end with delivering content. It would not seem to cover developer screwups. So, it seems as though Sony might be "technically" right in its reasoning to not offer refunds, but it may have to deal with a groundswell of anger from gamers for not making an exception in this case.