Crypto Miners Are Scamming GPU Buyers By Painting Memory Chips, What You Need To Know

There are many examples of why buyers should beware if they are considering perusing the used market for graphics cards. However, sellers of used, and possibly abused, old graphics cards have hit upon a new technique to deceive GPU hungry folk—painting memory chips to make them look factory fresh.

After prolonged use, and at sustained high temperatures, it is quite common for memory ICs to get a distinctly yellow tinge. If an experienced graphics card buyer with the opportunity to check a card carefully before purchase sees yellowing chips on the PCB, it is thus a warning sign that the product being considered is by no means brand-new. Neither would it likely have been used for ‘light gaming only’, be a product that was ‘just opened to check’, or even be a ‘duplicate gift’ and thus unwanted.

So, what is someone wanting to sell a load of old ex-mining graphics cards going to do to get the best price they can, especially if the examples have yellowing memory ICs? Brazilian YouTubers Iskandar Souza and Paulo Gomes reckon some Chinese imports of used GPUs now have memory ICs which have been painted over to obscure any yellowing.If you check out this video (Portuguese language only) spotted by VideoCardz, you will see the YouTubers investigate an AliExpress (SJF Store) purchased GeForce RTX 3060 Ti very carefully. At approximately 18-minutes into the video you get to see a ‘painted’ Samsung memory chip shaved with a scalpel, revealing the yellowy surface beneath.
Of course, the graphics card selling tricksters don’t use opaque ‘paint’ to recoat the memory IC, as that would make the inscriptions unreadable—making potential buyers even more curious. Instead, they have applied a very thin coating of a tinting substance. At around 18-minutes and 20-seconds into the video you can see this extremely thin layer removed using a hot air station and scalpel. It comes away in ultra-thin flakes. At first you might think the lettering is also being scratched away, but a short polish after the tint is removed reveals the inscriptions are there and remain highly legible. 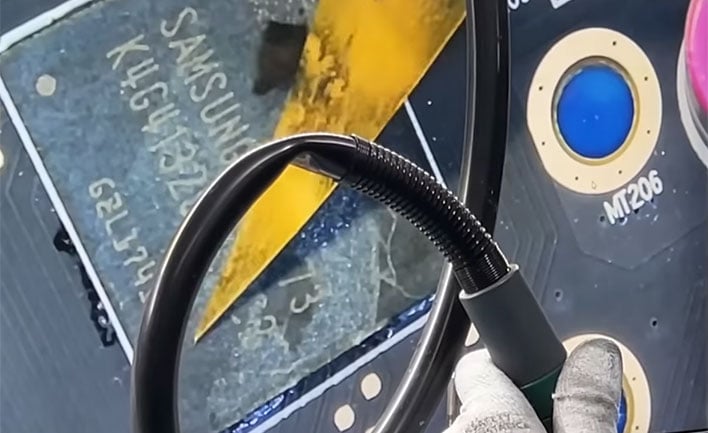 During the course of the video, watchers are provided with some more telltale signs to look out for with used graphics cards that might have had a hard life down the crypto mines. If the used graphics card has been thoroughly cleaned there probably won’t be dust and dirt deposits to check for, but you can look for signs of use like; warranty sticker breakages, missing screws, screw heads with contact wear, oxidised electrical contacts, and apparently the substrate around the GPU will be a much darker green with heat and age (see image below). 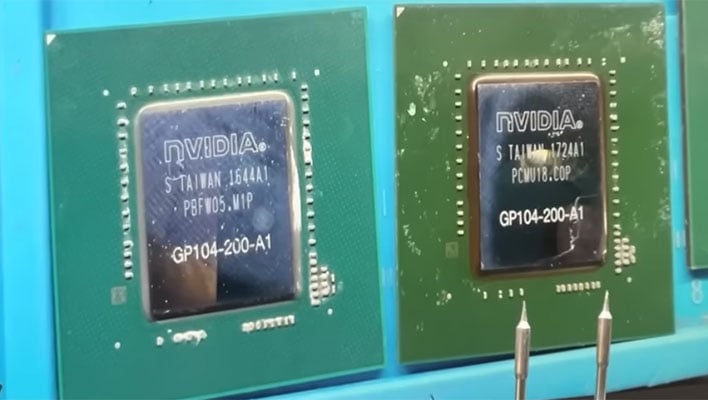 One of our most recent stories regarding the perils of used and ex-mining GPUs concerned a batch of used AMD Radeon RX 6900 and 6800 GPUs which had a very high rate of physical GPU silicon failure. Please readers, be careful out there, and if you are tempted by used products try and get them from an establishment which offers some kind of guarantee.