What products do you think of when you hear "Corsair"? The company got its start with memory where it built up its reputation. These days, the boat company sells a whole range of products including power supply units, and it would like you to know that its PSUs of appropriate wattage are primed and ready for NVIDIA's latest Lovelace GPUs.


That declaration includes both having the capacity to handle the power draw of the new GeForce cards as well as the ability to hook up to them. The cards will include dual-8-pin-to-12-pin adapters in the boxes like the higher-end GeForce RTX 3000 models, but if you'd prefer, you can purchase a cable from Corsair to connect directly to the video card's 12-pin power connectors. 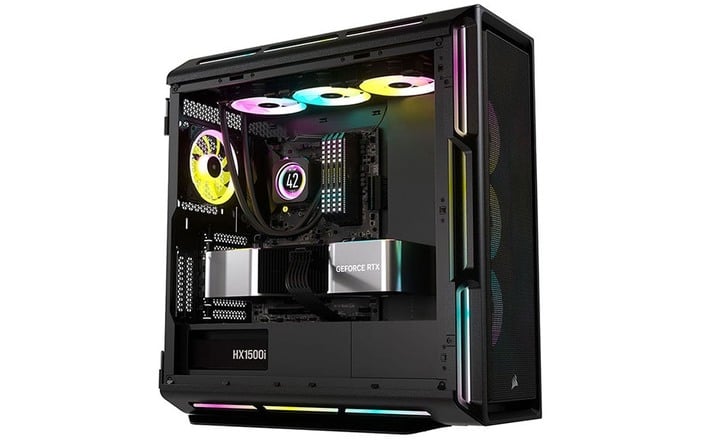 See how nice and clean that gigantic GPU looks in this system?


That will not only save you the hassle of having the extra cable-length from the adapter in your case (and the ugly sight of mid-cable connectors), but also allows the new video cards to draw more power from the PSU. Corsair says the extra four sense pins are connected and configured for 600W operation on compatible power supplies, although that apparently only includes units rated for 1.2 kW or more.


Now, you can't make an older power supply into an ATX v3.0-compliant model just by adding a cable, but Corsair says that its units are already ready for the high-power draw of NVIDIA's finest—as long as they meet up with NVIDIA's own recommendations for the new GPUs. That means 850W units for the RTX 4090, and 750 or 700W for the RTX 4080 16GB and 12GB, respectively.

Besides the new PSU cables, Corsair also has Hydro X Series waterblocks on the way for NVIDIA's 40-series GPUs, too. The company says that they're "full-conversion" waterblocks, so they completely replace the air cooling on the GPU. According to Corsair, they should allow you to "squeeze every drop of performance" out of Ada Lovelace, and they'll naturally include integrated RGB LED lighting. These will be available in November.

If you're after one of those 12VHPWR connectors, you can order the cable immediately from Corsair's web store for $20. The company says that they'll be shipping those out starting September 29th, so you'll have plenty of time to admire the wire before you get your RTX 3090 in October. Corsair has a modular PSU cable support matrix that is supposed to show which units can use the new cable, but it doesn't appear to have been updated yet. Maybe check back in a few days.