It's not taking long for memory makers to crank out DDR5 kits that blast way past the initial wave of 4,800 MT/s offerings that arrived when Alder Lake debuted. How high they'll go remains to be seen. In the here and now, however, Corsair is offering up for the sale the world's fastest DDR5 memory kit under its enthusiast Dominator Platinum RGB line.
The key distinction here is that its 32GB (2x16GB) Dominator Platinum RGB DDR5-6600 memory kit is the fastest memory available to buy, rather than the speediest RAM ever announced. G.Skill still owns bragging rights for the latter after having unveiled a DDR5-6800 Trident Z5 memory kit last October, though seven months later it's still not available to purchase.
Even DDR5-6600 memory kits are extreme rare in the retail space. Up until now, G.Skill's Trident Z5 RGB with black or silver heat spreaders has been the sole option. Both are in stock at Amazon for $498.99 via a marketplace seller, and on backorder at Newegg for $459.99.
Corsair's Dominator Platinum RGB DDR5-6600 memory is in stock at Corsair's web store, it's cheaper at $429.99, and it sports tighter timings at 32-39-39-76 versus 34-40-40-105. So it's the better option, and at this moment in time it's also the best option for power users who want to splurge on the fastest DDR5 memory that money can buy.
The caveat is that the right pairing is essential to get the most out of this memory. 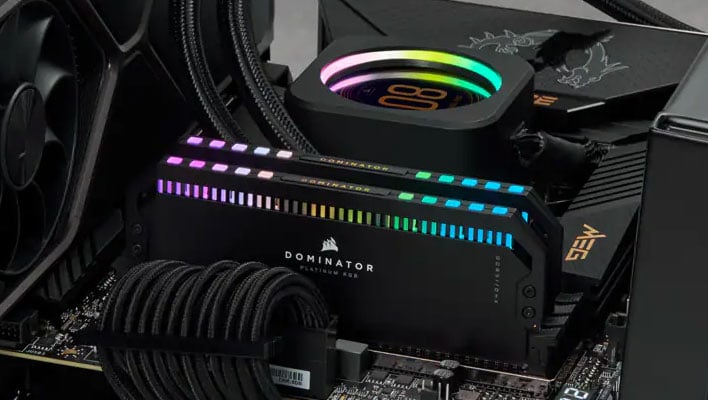 "Specialist, high-specification motherboards such as the ASUS ROG Strix Z690-F and ROG Maximus Z690 Hero are required for Dominator Platinum RGB DDR5 6,600MHz to reach its stated frequency. Not all 12th Generation Intel Core processors support DDR5 frequencies of 6,600MHz. A top-binned Intel Core i9-12900K is recommended to reach 6,600MHz," Corsair says.
In addition to serving up some serious speed, each Dominator Platinum RGB DDR5-6600 module is outfitted with a dozen individually addressable Capellix LEDs. Corsair's "patented DHX cooling" is also at play, which dissipates heat from both the ICs and the ground plane of the PCB with its own dedicated heat spreader.
Corsair says its DDR5-6600 memory kits are available at its web store in "strictly limited quantities." It's not clear if it will be more widely available at its retail partners.