If nothing else, the 7-Zip benchmark makes for an interesting test. That's both because it is a practical benchmark (rather than a synthetic test) and also because it exhibits unusual performance behavior. Regular leaker Raichu (@OneRaichu on Twitter) is coming at us again with another pre-release Raptor Lake leak of, you guessed it, the 7-Zip benchmark.

7-Zip's venerable benchmark utility got a significant step-up with the v22 release of the open-source archiver. While it doesn't actually look any fancier, the no-nonsense test now presents its data in a more relevant format for modern systems, and it also includes a modicum of monitoring data as well. It's this version that Raichu used for his own testing on both a pre-release Core i9-13900K as well as a 12th-gen Core i9-12900K.

You can see those two results above and below. If you pore over the numbers, keep in mind that the Raptor Lake part is rocking not only a higher clock rate—visible in the monitoring data on the right side—but also eight additional Gracemont E-cores. 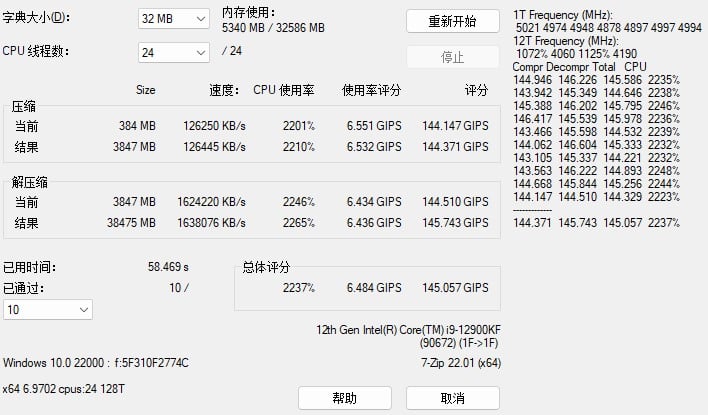 
The gains in compression tasks aren't that great—in fact, the Raptor Lake part actually performs worse on a per-core basis, for some reason—but the decompression performance is phenomenal, outstripping the older Alder Lake machine by nearly 60% on average across the ten benchmark runs.

For more perspective, we also compared the result to a Ryzen 7 5800X3D chip. 7-Zip is known to like big CPU caches and the Ryzen architecture, so the impressive showing here (in terms of per-core performance) isn't surprising. Of course, the massively multi-core Intel chips far outstrip the total performance of the 3D V-Cache Ryzen and its puny 8 cores.

The massive improvement in per-core decompression performance is likely in large part thanks to the increased L2 cache size in Raptor Lake. While the upcoming chips aren't expected to have big architectural changes, both P-cores and E-cores are seeing increased cache sizes and clock rates.

These simple changes alone should add up to significant performance improvements in most applications, at least for the desktop Raptor Lake CPUs. Of course, the additional E-cores will help in multi-threaded tasks, too. We'll find out just how much difference the changes make when these parts hit the market, which could be in late September.