A Closer Look At Intel's Xe-HPG GPU For Gamers With Ray Tracing, VRS And Image Sharpening

One of the things Intel shared during its Architecture Day 2020 event earlier this week was a new set of details related to its Xe GPU efforts for gamers. Up to this point, the bulk of information surrounding Xe—both official and from various leaks and rumors—has been tied to Intel's upcoming Tiger Lake CPUs for laptops, along with a spattering of Xe product teases for the data center. But as Intel has said all along, gaming is a market segment it fully intends to compete in with Xe, and we thought it would be a good idea to break down what we know about its gaming-oriented Xe-HPG GPU.

While still early, Intel is at least saying all the right things. It has also developed good driver habits, with frequent driver updates to its discrete graphics, with optimizations and suggested settings for specific games. It all ties into what Intel has been calling an "Odyssey," which also included some nifty looking renders, like the one you see above. Note that what you see up there is a previously released Xe GPU concept shroud (one of several), and not an actual product.

In any event, what exactly are we looking at with Xe-HPG? Well, it is one of a handful of Xe GPUs Intel intends to release. Just as both AMD and NVIDIA offer a varied GPU product stack for different market segments, so will Intel. Here's a handy cheat sheet... 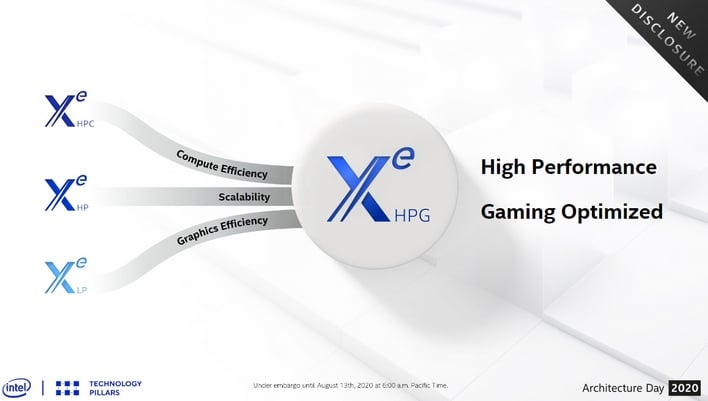 Xe-HPG is optimized for gaming, and according to Intel, it will be used in high-end and mid-range graphics cards. Intel will also target entry-level graphics chores, but with its Xe-LP GPU, which is what will accompany its Tiger Lake CPUs (and will also find its way into discrete cards as well).
This entry plays into one of Intel's fundamental goals to make its Xe architecture scalable. The Xe architecture will span from low power designs all the way up to potent data center configurations. Intel's Xe-HPG slots in the middle, with features and tweaks specifically aimed at gaming. Let's have a look at some of those. 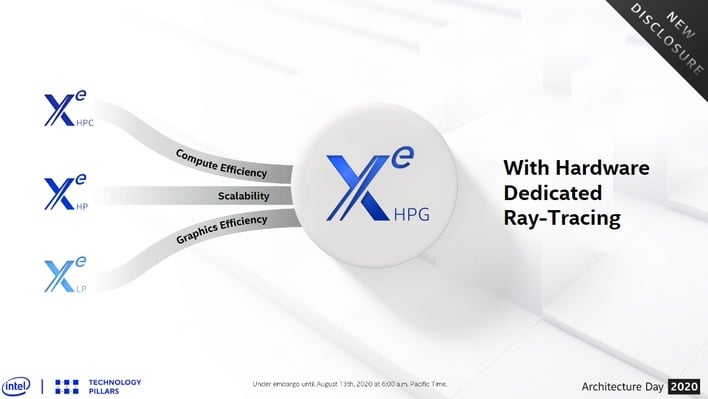 One of the most interesting features of Xe-HPG is hardware support for real-time ray tracing. NVIDIA gets credit for kick starting the era of ray-traced gaming, and this time next year, it will be a staple of products by all three major GPU makers (assuming Intel becomes a major player, which is yet to be determined). AMD will be next, with its Big Navi GPU due out in a couple of months.
Ray tracing is an important feature for Intel to embrace, but that may seem like a bold statement now because the market is not exactly flush with games that support it. However, with both next-generation game consoles—Sony's PlayStation 5 and Microsoft's Xbox Series X—having real-time ray tracing capabilities, the floodgates are likely to open on the software development side.
Bear in mind that we're really talking about a hybrid implementation. That's to say, games that support ray tracing only do so in parts of the scene, like with reflections in puddles and lighting through windows and from neon signs. Traditional rasterized rendering still features heavily in game design, as the computational demands from ray-traced visuals are still beyond the scope of today's hardware. Nevertheless, Intel confirmed it has ray tracing in its sights. 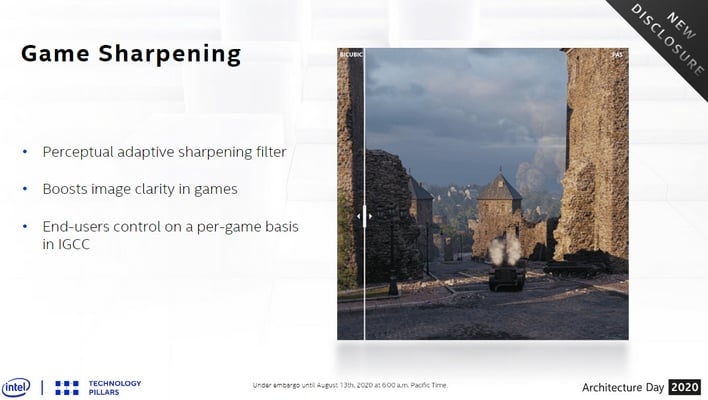 Game sharpening is another feature Intel confirmed will come along for the Xe-HPG ride. This is a post-processing technique that can give in-game scenes a visual quality boost, similar to what AMD and NVIDIA already offer with their Radeon and GeForce cards, respectively.

This actually already exists within Intel's Graphics Command Center (IGCC) software, for integrated GPUs. It's basically an algorithm to employ adaptive sharpening to scenes to improve image clarity. Users can control this on a per-game basis through Intel's IGCC utility. 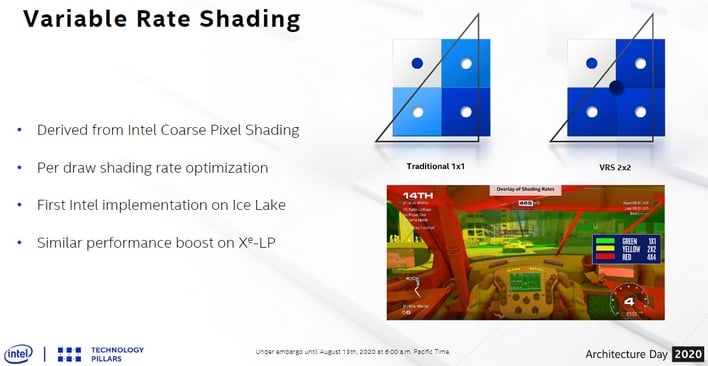 Another biggie is variable rate shading (VRS). Intel wrote a white paper on the topic that breaks downs the tiers, but in short, it's a hardware technique to improve performance by rendering parts of a scene differently. The GPU can devote more of its power to more important parts of a scene. It can especially benefit VR applications, with the GPU focusing more heavily on what is directly in front of the user's eyeballs, and less so on peripheral images.
Intel's Xe GPUs will support VRS Tier 1, with no mesh shaders, at least for Xe-LP on Tiger Lake. However, we don't know yet if Xe-HPG will have higher level support and more hardware assist for VRS. Fingers crossed it will. 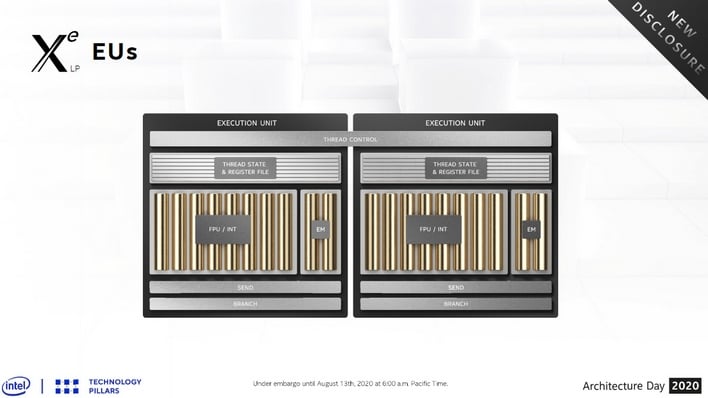 What you see above is actually the execution unit (EU) block for Xe-LP graphics in Tiger Lake. Why include it here? Well, it will be similar in Xe-HPG. As it applies to Tiger Lake, Intel is claiming a 2X performance uplift over Ice Lake's Gen 11 graphics in many workloads and games. For Xe-HPG, we anticipate possible Tensor and dedicated ray tracing hardware to find its way into the package. However, Intel is still keeping the finer details close to the vest.
One final side note to all this: Intel could end up tapping TSMC to build its Xe-HPG GPUs, rather than fab the parts itself. Intel appears to be stretched a little thing these days and hasn't actually had an time venturing past 14nm silicon. A recent report suggested Intel is partnering with TSMC to build its Ponte Vecchio (Xe-HPC) parts on 6nm. As for Xe-HPG, if not produced by TSMC, Intel still plans to source manufacturing from an external partner, but which one has not been confirmed.
In any event, at this moment in time, Xe-HPG is scheduled to release sometime next year. We'll get our first official taste of the Xe architecture with Tiger Lake, but it will be interesting to see how its gaming GPU debut goes in 2021.