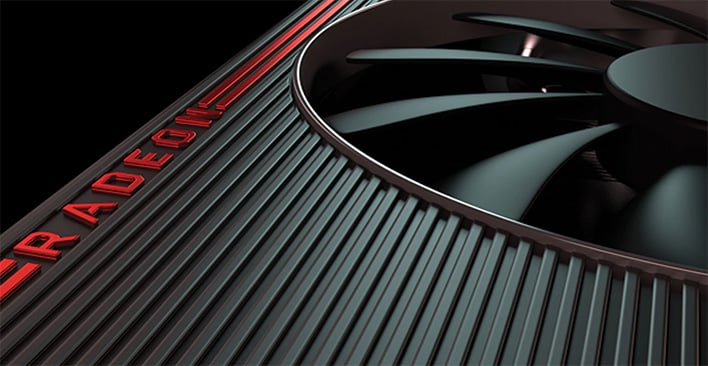 We have seen a whole bunch of leaks and rumors referencing AMD's upcoming 'Big Navi' GPU, and even AMD has seen fit to use that term on occasion (unofficial as it might be). And perhaps with very good reason—two prominent leakers on Twitter claim to have the inside scoop on Big Navi, saying it will feature a whopping 80 compute units (CUs).
Big Navi, indeed! For context, AMD's current generation Navi 10 GPU based on its first-gen Radeon DNA (RDNA) graphics architecture sports half (40) as many CUs. Navi 10 is what powers both the Radeon RX 5700 and Radeon RX 5600 series, in different forms (Navi 10 XE, XLE, XME, XL, XT, XTX, and just regular ol' Navi 10).
Otherwise known as Sienna Cichlid, the GPU bearing the Big Navi badge is codenamed Navi 21. The CU count comes by way of Komachi and Rogame, both of whom apparently shared their source for the information to Videocardz. Where exactly the information originates from is not known by us, however, as the leakers want to keep that a secret.
Getting to the 80 CU figure also requires some number crunching. To figure out the number of CUs, you use the following equation: shader engines * shader arrays per shader engine * compute units per shader array.
Let's fill in those values, shall we? According to the leak, Big Navi/Sienna Cichlid/Navi 21 will feature four shader engines, two shader arrays per shader engine, and 10 CUs per shader array. Multiply those together (4*2*10) and you get 80 CUs.
One thing to keep in mind is that this supposed value represents a full fat version of Navi 21. We may not see a fully configured Navi 21 product from the get-go. If and when it does arrive, though, we could be looking at 5,120 stream processors, based on each CU having 64 cores.
Here is a handy chart for comparison...

If this information is true, Big Navi has the potential to be a beastly GPU. Also bear in mind that AMD will be embracing ray tracing support on the hardware level with at least some of its next-gen GPU offerings. This all sets the stage for an interesting showdown with NVIDIA and its consumer-based Ampere products, which are expected to arrive later this year as well.
Intel is also prepping a discrete GPU product for 2020, though its initial offering probably will not be on the level of a Big Navi graphics card or a something like the anticipated GeForce RTX 3090.