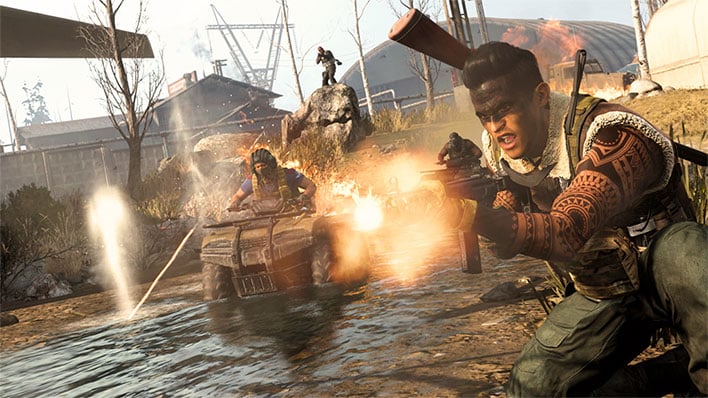 Publisher Activision and developer Infinity Ward have figured out a surefire way to rile up gamers—push out a game update that checks in at a whopping 84 gigabytes. Actually, it is closer to 85GB, but even rounding down does little quell the rising tide of criticism over massive game updates, a category this one punches into like the Kool-Aid character smashing through a wall.
To the credit of Infinity Ward, the developer offered a heads up that the update for Call of Duty: Modern Warfare and Warzone would be "large." That may have been underselling it a bit, but at least the sizeable download did not come completely out of left field.
"The Season 4 download is going to be large. In order to reduce the overall disc space that MW and WZ take up, we're compressing a bunch of assets. Once installed, the S4 launch will only take up an additional 4GB on consoles for all of the new content," Infinity Ward said.
"We're continuing to sweep all assets to make size reductions where we can, and also further optimize future patches for size. If helpful, one reminder for console players, you can uninstall the content packs for modes that you're not playing if you want to free up space," Infinity Ward added.

The developer has essentially chosen to replace game assets to better manage future updates, but in order to do that, it has to push out a big update initially. And so here we are, it seems. Users on Twitter, meanwhile, have been posting their frustrations over the situation.

When you start the new COD Season 4 update and see its 84gb... #WarZone pic.twitter.com/fwyjb5gVbl

It is not clear how large the update is actually supposed to be. Activision also tweeted on the matter, but instead of a funny meme, the publisher said it is "actively investigating an issue for Modern Warfare where some players on Xbox are seeing a larger than expected download size for today's update. Stay tuned for updates."
Even though the update should, in theory, replace files so that the net loss on storage space is much smaller, there is still the issue of how long it can take to download an 84GB update on a slower connection, as well as any data caps a user might face. Even in the era of broadband, 84GB is rather big for a patch. Or so we thought.