Players who cheat are the scourge of online gaming, and it is an ongoing problem in popular titles. Suspensions and permanent bans are the tools of the trade for developers and publishers who seek to keep the issue at bay, though Infinity Ward and Activision have another idea—players suspected of cheating in Call of Duty: Warzone and Call of Duty: Modern Warfare will be matched up together.
This is in line with Activision's "zero tolerance" policy towards cheating. At the beginning of the month, the publisher announced it had dropped the ban hammer on 50,000 cheaters in Warzone alone, and promised to provide updated stats as time went on. The most recent update came on April 13, in which Activision revealed it had permanently banned 70,000 Warzone cheaters worldwide. 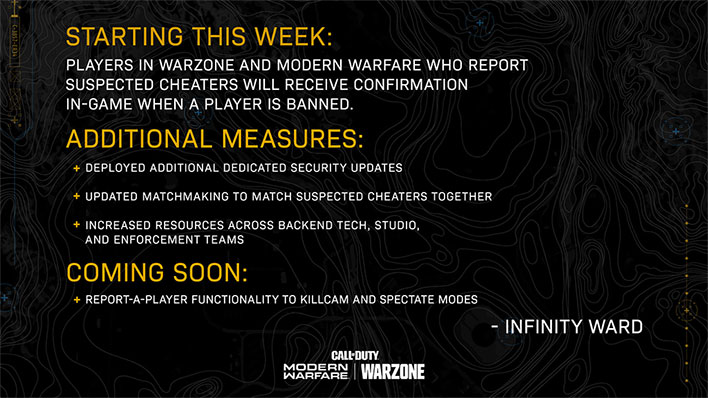 Activision still plans on swinging the ban hammer as needed, though on Twitter, developer Infinity Ward announced a few "additional measures" being implemented. They include...
Players who try to gain an unfair advantage using third-party hacks may now find themselves matched up with other suspected cheaters. It's a fitting punishment if you ask us. Sure, it'd be even better if players wouldn't cheat in the first place, but with over 50 million players flooding Warzone, it's unrealistic to expect everyone will always play by the rules.
Looking ahead, Infinity Ward is also planning to add the report-a-player functionality to Killcam and Spectate modes. This could make it easier to identify and ultimately weed out cheaters. Here's hoping the new measures have a measurable effect on the problem.