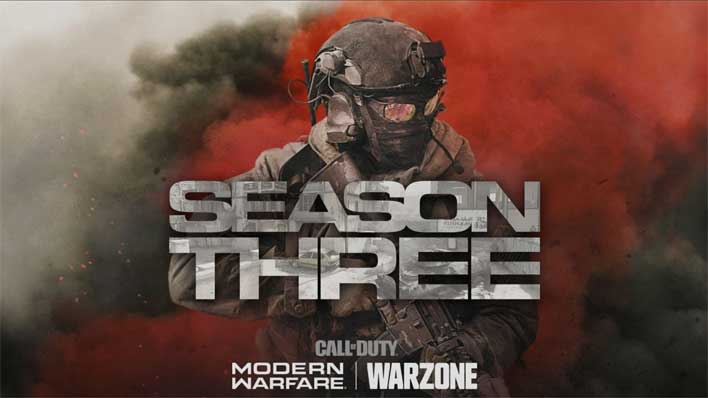 Call of Duty: Modern Warfare fans should be excited to hear that Season 3 for the game is now available. The new season includes new maps, new playlists, and brings updates for the free-to-play Warzone mode that has proven very popular. The three new maps include Aniyah Incursion, Talsik Backlot, and Hovee Sawmill; all of which are 6v6.

Talsik Backlot is almost right out of the original Modern Warfare video game. This map has players in a deserted urban area of Urzikstan and offers a combination of close-quarters combat along with long-range sniper fighting. Hovee Sawmill is a new map set in the mountains of Kastovia. Players will shoot it out on rooftops, and one section of the map has a rolling river with battles offering mid and long-range sight lines.

Aniyah Incursion puts players in a lavish setting inside a palace. It's said to be a smaller version of the Ground War map giving players long sightlines, and smaller crawling spaces that can be used to flank enemies. Later in Season 3, another 6x6 map called Hardhat will land along with Aisle 9, a new 2v2 gunfight map. The playlists that will come through Season 3 include modes like Gun Game Reloaded and Reinfected Ground War.

Warzone updates include the ability to play a match with four people. Coming later in the season will be additional playlists for battle royale and Plunder that will limit players to specific weapon types and offer scopes and scattered guns. New weapons and blueprints will be available in supply boxes and as ground loot throughout the season. Season 3 will also include multiple XP events, additional free content, holiday celebrations, and other items spread out across the season. Modern Warfare Season 2 kicked off in February.