Best Buy restocks are your best chance at scoring a Geforce RTX 30 series graphics card at MSRP, but the latest one carried a $199.99 caveat. That's the price of an annual subscription to Best Buy's Totaltech program, and if you even wanted a chance to bag a Founders Edition card during yesterday's restock, you had to pony up for a membership.

It seems this is becoming a trend. Last month, for example, GameStop held its first PlayStation 5 restock event of the year, and it was exclusive to PowerUp Rewards Pro members. It's a much cheaper subscription, though, priced at $14.99 per year. Still, it likewise didn't come with a guarantee that you'd score a hard-to-find console, just that you were eligible to buy one during the event. 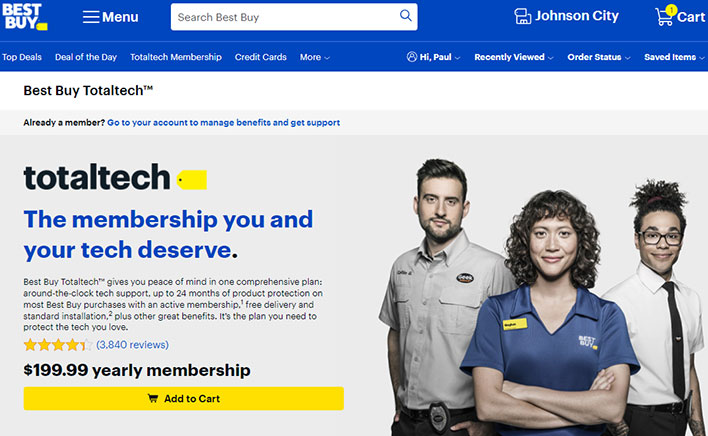 Best Buy, on the other hand, wants $199.99 for the same privilege. Granted, comparing the two membership programs boils down to apples and oranges. But for buyers who are only interested in obtaining a graphics card at MSRP, it boils down to an expensive paywall marketed as an "Exclusive Access Event," as pop-up messages on Best Buy's website indicated yesterday.
Founders Editions cards within the GeForce RTX 30 series are especially desirable because they tend to be the least expensive, in terms of MSRP. Custom models by NVIDIA's add-in board (AIB) partners come with additional bells and whistles, such as factory overclocks and beefier cooling solutions. But they usually cost more than the FE models.
The double whammy here is that Best Buy is the only official carrier of GeForce RTX 30 series FE cards in the US. Let's say you were after a GeForce RTX 3060 Ti FE. It sells for $399.99, but that price jumps to nearly $600 when factoring in the cost of a Totatech subscription.
On the plus side, the subscription paywall probably helps get more cards into the hands of gamers instead of scalpers. And it's still cheaper than going through eBay, where the 3060 Ti is fetching around $800. There's still a potential profit margin for scalpers, though, especially if they take advantage of multiple restocks throughout the year and manage to buy multiple cards.
The other trend that inevitably pops up when there's a shortage is to force bundle packages on buyers, as we saw earlier this month at Antonline. At least in that case, the pricing wasn't egregiously high, and the bundles were actual cheaper than they had sold for a month prior.
Anyway, it's not clear if Best Buy will again limit restocks to Totaltech members in the future or if it will open up the playing field for everyone to participate. We'll just have to wait and see.