Well now, it appears Best Buy has done us all a solid by revealing price points and specifications for Intel's upcoming 65W Alder Lake-S processors. These are the non-K models that will join the existing stack of "K" and "KF" SKUs that got the Alder Lake party started, and will likely join the fray sometime around the Consumer Electronics Show next month.
Nothing has been confirmed, mind you, but the general expectation is that Intel will unveil an expanded lineup of Alder Lake chips at CES 2022. If going by the plethora of leaks up to this point, then several 65W models are on tap. The closest we have to a confirmation, however, doesn't come from Geekbench or some random forum on the web, but through Best Buy's website.
The retailer briefly posted a dozen SKUs that have not yet been announced, let alone released. You can no longer view the listings on Best Buy's website, but as we've said a million times, there are no mulligans on the internet—caches and screen captures prevent it from being so. 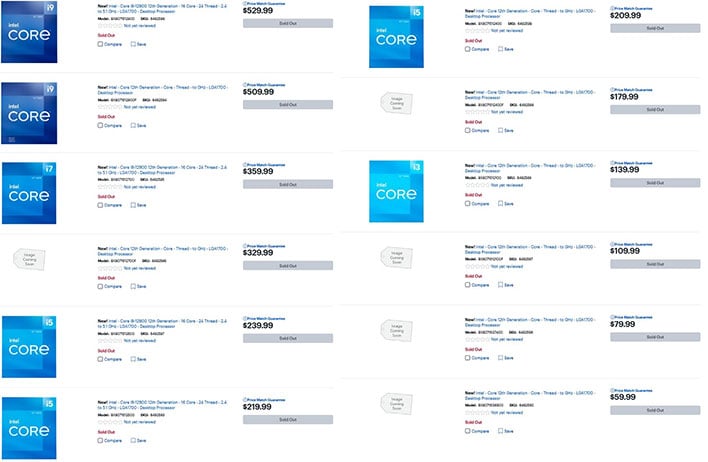 In this case, it's the latter that allows us to see where pricing will land, courtesy of @momomo_us. We've gone ahead and cropped the screenshot for easier viewing and to highlight just the SKUs that have not yet launched, and as you can see, pricing ranges from $59.99 (Pentium G6900) on up to $529.99 (Core i9-12900).
Here's what we are looking at...
In addition to revealing the core specifications and retail pricing, the listings also seemingly confirm that several Alder Lake SKUs will roll solo with high-performance P-cores (Golden Cove), rather than mixing them with efficient E-cores (Gracemont). Note that P-cores support Hyper Threading while E-cores do not, hence why the total number of threads is not always exactly double the number of total cores, depending on the makeup.
These are some aggressive price points. For example, AMD's 6-core/12-thread Ryzen 5 5600X typically sells online for $299. It looks like Intel's Core i5-12600 will be $60 cheaper, making it an intriguing proposition for someone who isn't interested in overclocking.
Of course, there is the overall cost of the platform to factor into buying decisions. To that end, Intel is expected to announce mainstream and budget chipsets that should bring down the cost of compatible motherboards. Meanwhile, DDR5 memory is likely to carry a premium for a long while, though Alder Lake also supports DDR4.
It will be interesting to see what impact these chip launches have on the landscape. They could potentially prompt AMD and its retail partners to lower pricing on the Ryzen 5000 series. Plus there is a Ryzen 5000 refresh looming, which will pile more cache onto Zen 3 by way of stacked 3D V-cache. So at least as it applies to processor options, consumers are in good shape for 2022. As for GPUs, well, that's another story.