PC Memory Prices Are Projected To Drop And That Includes DDR5, But There's A Caveat

The introduction of Alder Lake has created demand among home consumers for newfangled DDR5 memory modules, but anyone hoping to score a kit will have to pay a premium (compared to DDR4). And that's before factoring in scalper pricing and bundles like the ones in Newegg's Shuffle program. There's some good news, though—DRAM pricing is set to come down a bit.
That's according to the analysts at TrendForce, a market research firm that takes a continue pulse of the memory market (including DRAM and Flash). In a report released this week, the firm predicts that the average selling price of DRAM will see a sequential decline of anywhere from 8-13 percent in the first quarter of 2022.
"Whereas demand for Chromebooks has noticeably slowed down, demand for consumer and commercial notebooks remains strong. Furthermore, certain components which were previously in shortage are starting to experience improved lead times. Hence, quarterly shipment of notebook computers for 4Q21 will likely surpass earlier projections," TrendForce says.
"Looking ahead to 1Q22, not only will the demand side undergo a cyclical downturn, but the sufficiency ratio of PC DRAM will also surpass 3.0% following 4Q21’s high base period for comparison," the firm added.
The upshot for consumers is that these factors will collectively "result in DRAM prices undergoing a noticeable decline." So in other words, your next PC memory upgrade could be a bit cheaper than you might have anticipated (or you could get more bang for your buck with a higher end kit, depending on how this all actually works out).
That said, there some potential caveats. OEMs are purportedly carrying a lower inventory level of DRAM heading into next quarter, which could "curb the price drop" to some degree. Even so, however, DRAM makers have begun shifting some production from mobile DRAM to PC DRAM, so prices are still expected to drop. 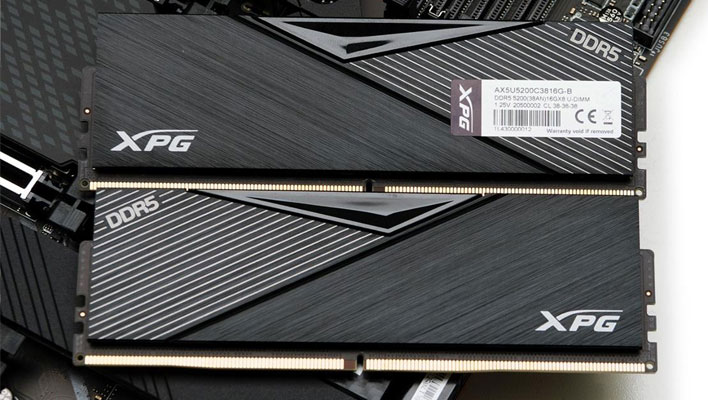 "In particular, DDR4 and DDR5 PC DRAM will experience QoQ declines of 5-10 percent and 3-8 percent, respectively, for 1Q22," TrendForce notes in its DRAM report.
While that's encouraging, there's another caveat. Even though DDR5 memory pricing is predicted to decline next quarter, it may not be as noticeable as DDR4 because the "penetration rate is still relatively low."
Therein lies the gotcha, at least for DDR5 shoppers. As of this moment, Alder Lake is the only consumer platform that supports DDR5. It also supports DDR4, just not in the same motherboard. Given the high premium placed on DDR5 memory kits, some buyers may opt to stick with DDR4 for another round.
They may not even have a choice, depending on supply—eBay scalpers had initially been selling DDR5 kits for up to $2,400 on the auction site, which is grotesque. Scalper pricing has adjusted downward, but looking at recently sold kits, paying $750 to $1,000 for a 32GB kit is no bargain. Keep your fingers crossed that supplies improves next quarter.