Mining cryptocurrency is just one small part of the problem that plagues the semiconductor industry related to chip shortages, with the increased demand for GPU compute power. However, NVIDIA has been catering to this market in hopes of alleviating demand pressure on gaming graphics cards with its CMP HX family of cards. The company's OEM partners have gotten in on the crypto fun as well of course. Last week, Gigabyte officially announced its CMP 30HX mining card complete with an abbreviated three month limited warranty. Mining is hard on cards, so manufacturers aren't lining up to extend warranties as long as graphics cards designed for gaming purposes. The CMP 30HX is based on NVIDIA's TU116-100 graphics processor, which also powers the GeForce GTX 1660. Now it looks like ASUS will be bringing its own CMP 30HX card to market, if photos that have popped up online turn out to be legitimate. 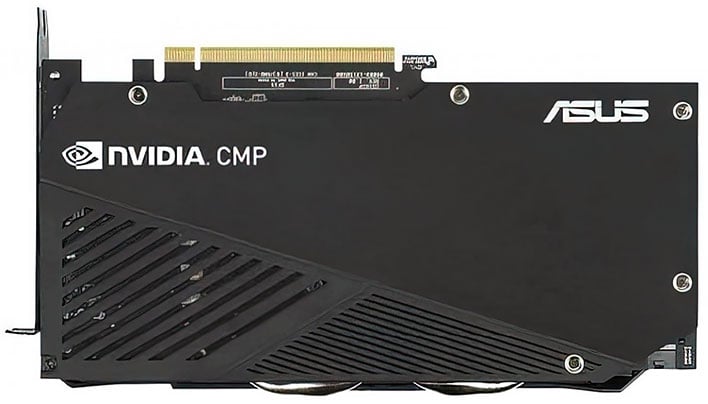 Aside from the total lack of display output ports, this card could easily be mistaken for a GeForce graphics card. Along with photos that have emerged, there are also purported specs of ASUS' CMP30HX-6G card. Rumor has it the card will have a 1,530 MHz base clock and a maximum boost of 1,785 MHz. 6 GB of GDDR6 memory with a 192-bit memory bus will be along for the ride. Like the vanilla GeForce GTX 1660, the CMP30HX-6G will have 1408 CUDA cores.


VideoCardz seems to think that the card has its own addressable RGB lighting strip on the side of the card, but that's very unlikely. When we took at look at ASUS's TUF Gaming X3 Radeon RX 5700 and 5700 XT, we found the same strips on the cooler. It looks like a series of different-colored lights, but it's the plastic shroud that has the tint and just a couple of white LEDs sit underneath. ARGB lighting on a mining card would be a ridiculous excess that adds to the cost of mining. On the other hand, a couple of LEDs is a little silly but adds very little power consumption or processing requirement to keeping them running. ASUS's AuraSync software allowed disabling the lights on the Radeons, and we would surmise that the same thing is true here, too.

We're still waiting for the heavy hitters of NVIDIA's mining-focused cards to make their appearance. The CMP 90HX is rumored to be based on the company's GeForce RTX 3080 GPU, for example. No doubt NVIDIA will want to protect its investment in the mining arena, as the GeForce maker is allegedly working on adding an enhanced mining limiter to its entire product lineup, too. The cards that are already out in the wild would presumably be unaffected by any driver-imposed limitations, since miners can stick to older drivers. However, a hardware limiter like the one that's apparently coming to GeForces near you should do a better job of preventing gaming cards from dipping their toes into the lucrative mining market.