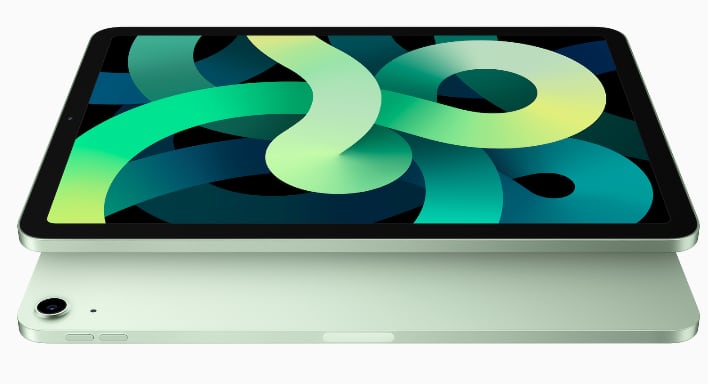 When it comes to tablets that are currently available on the market, there's Apple's iPad family, and then there's everyone else. Apple has the market cornered with a wide variety of tablets covering multiple price points including the iPad mini, iPad, iPad Air, and iPad Pro.

Unfortunately, the discount only applies to a single color of the entry-level iPad Air, and that's Green. Given that many people put their tablets (and smartphones) in a case anyway, the color choice probably isn't a deal breaker. The Rose Gold, Silver, Sky Blue, and Space Gray colors are still listed at full price on Amazon, and all models will ship tomorrow, October 23rd.

The 4th generation iPad Air 4 features an all-new design that is nearly a dead ringer for the iPad Pro. The 10.9-inch iPad Air most closely aligns with the 11-inch iPad Pro, and can even use cases and other accessories that were designed for that tablet, including the Magic Keyboard. But while the iPad Air looks like the iPad Pro, it is missing out on some key features compared to its more expensive sibling (which starts at $799). For starters, the iPad Air leaves out the 120Hz display, and Face ID has been replaced with Touch ID incorporated into the power button. The quad speakers have been downgraded to dual speakers, and the iPad Air misses out on a second ultra-wide camera and LIDAR.

The other big difference between the two is that the iPad Pro features the A12Z Bionic SoC, while the iPad Air uses the new 5nm A14 Bionic. The A14 Bionic might be able to outpace the A12Z Bionic in some specific single-threaded benchmarks, the but A12Z Bionic by far has the more powerful GPU (which is heavily used throughout the iOS 14 UI and in graphics-intensive apps).

With that being said, it's likely that a great number of people would be willing to give up the "advantages" of the iPad Pro for the same basic design as the more expensive iPad Pro and partake in this sweet $40 discount.