In addition to the new Apple Watch Series 6 and Apple Watch SE, Apple today announced the all-new iPad Air. As we learned from previous leaks, the new iPad Air shares its overall design language with the more expensive iPad Pro. That means that there are minimal bezels all-around due to the lack of a Home button.

Just as the leaks forecast, Touch ID, which was previously found within the Home button, has been moved to the top-mounted power button. The iPad Air also gains USB-C connectivity, which is another carryover from iPad Pro. Likewise, the iPad Air supports the second-generation Apple Pencil, which magnetically attaches to the side of the case (again, cribbed from the iPad Pro). 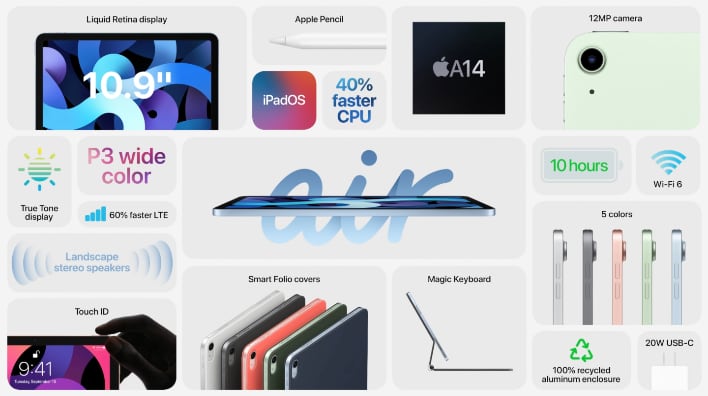 The iPad Air is available in five colors this time around — including green and blue — and the Liquid Retina display now measures 10.9 inches across with a resolution of 2360x1640. Apple is using a 12MP rear camera from the iPad Pro, while the front FaceTime HD camera features a 7MP sensor with HDR support and 1080p/60 video capture (which should be perfect for Zoom and Google Meet sessions). 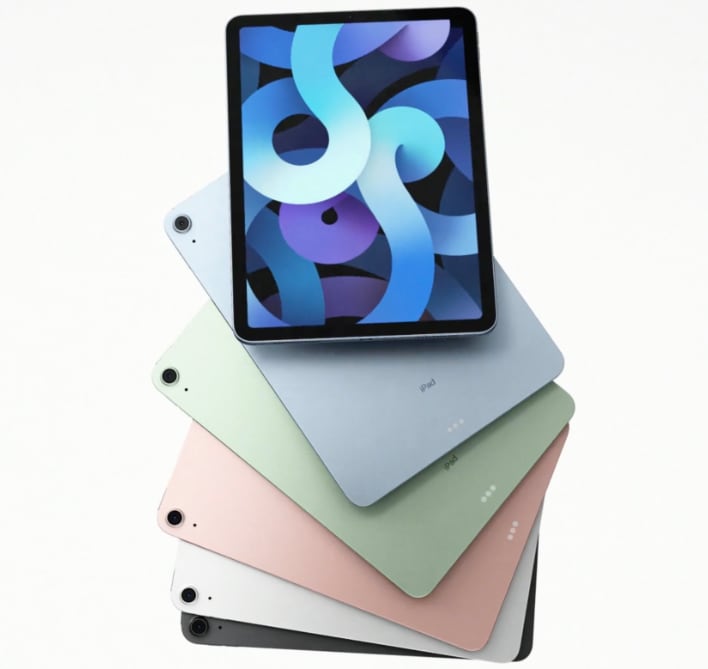 But perhaps the biggest surprise that Apple dropped today is that the iPad Air will be its first shipping product with the all-new A14 Bionic SoC. We had previously expected that Apple might ship the tablet with last year’s A13 Bionic, but Apple is swinging for the fences with the new iPad Air. The A14 Bionic, which will in some form find its way into the iPhone 12 and iPhone 12 Pro, is based on a new 5nm process node and is built by TSMC. It includes a 6-core CPU and a new 4-core GPU, offering a 40 percent improvement in performance over the previous generation iPad Air. There are a total of 11.8 billion transistors onboard, including a 16-core Neural Engine.

Apple says that the new iPad Air will begin shipping next month priced from $599.