Did you miss Apple's livestream today? No worries, we have you covered with the highlights. If you haven't already, check out write-up on Apple's new and highly hyped M1 Max and M1 Pro silicon, which serves as a primer for its upgraded MacBook Pro laptops introduced today. The latter is the focus here, as well as Apple's AirPods 3 and Home mini speaker lineup.
Outside of its new silicon, the updated MacBook Pro 16 and MacBook Pro 14 were the most interesting reveals. They're impressive from a high level overview. Or if going by Apple's verbiage, they're "reimagined" and the suitable for "anyone who wants the world's best notebook." That's a big claim, obviously.
"We set out to create the world’s best pro notebook, and today we’re excited to introduce the all-new MacBook Pro with M1 Pro and M1 Max—a game-changing combination of phenomenal performance, unrivaled battery life, and groundbreaking features," said Greg Joswiak, Apple’s senior vice president of Worldwide Marketing.
Apple is pitching these as its most powerful Mac notebooks ever, each infused with its latest 10-core M1 Pro and M1 Max hardware. And indeed, this represents the biggest upgrade to the MacBook Pro family in several years, in part (but not wholly) due to the beefed up custom silicon that's riding shotgun in both models. 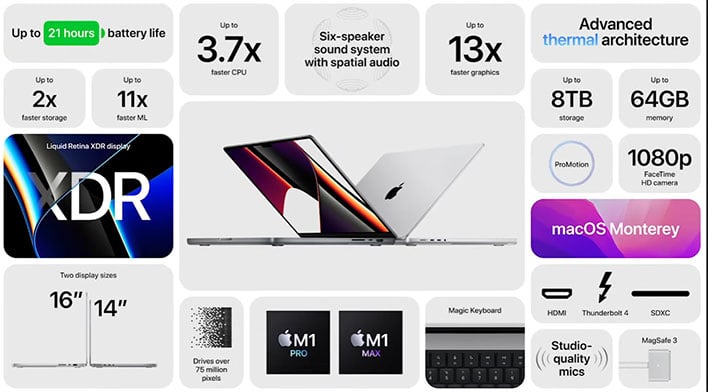 Pricing starts at $1,999 for the 14-inch MacBook Pro and $2,499 for the 16-inch MacBook Pro, so they are a little more expensive this time around. They feature thinner bezels, and as previously rumored, a small notch at the top for the webcam.
These are also the first MacBook Pro models to feature a Liquid Retina XDR display. It's a mini LED screen that can ramp up the brightness to an eye-searing 1,600 nits at peak, with a 1,000,000:1 contrast ratio, HDR support, wide color gamut, and up to a 120Hz adaptive refresh rate.
In a surprise move, Apple also brought back HDMI connectivity, as well as an SD memory card reader, both of which were removed five years ago. Their return is not quite a mea culpa, but it will please fans who were upset at their dismissal in 2016. Users will also find three Thunderbolt 4 ports, the return of MagSafe (MagSafe 3), Wi-Fi 6, and Bluetooth 5.0 connectivity.
On the RAM and storage front, both models come with 16GB of unified memory, while the Apple is offering fast SSDs up to 8TB in capacity, that run at up to 7.4GB/s. Base configurations allot 512GB of storage on the 14-inch MacBook Pro, and 1TB on the 16-inch MacBook Pro.
Here's how the base configuration works out for the 14-inch MacBook Pro starting at $1,999...
Users can upgrade to beefier variants of the M1 Pro or M1 Max, for $200 to $700, depending on the chp. And here's the base config for the 16-inch MacBooki Pro starting at $2,499...
Stepping up to the M1 Max costs an additional $200 (10-core CPU, 24-core GPU) or $400 (10-core CPU, 32-core GPU).
The retooled MacBook Pro 16 and 14 are available to order from Apple's website right now. 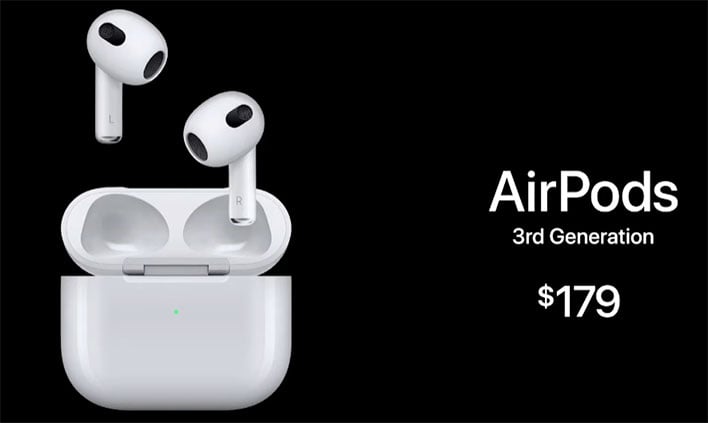 Apple also unveiled its third-generation AirPods with spatial audio and a new contoured design that is supposed to help them sound better and feel more comfortable. They're powered by an H1 chip and use "computational audio" with Adaptive EQ to deliver "breakthrough sound," with Dolby Atmos support to boot.
"AirPods forever changed wireless headphones with their groundbreaking design, incredible sound, and magical experience," said Greg Joswiak, Apple’s senior vice president of Worldwide Marketing. "We are excited to introduce the next generation of AirPods, featuring unrivaled sound through Adaptive EQ and spatial audio with dynamic head tracking, along with seamless interaction between Apple devices—making the world’s best-selling headphones even better."
Apple says the AirPods 3 have an IPX4 rating for water and sweat resistance, for both the individual earbuds and the charging case. They also feature custom drivers with a high-dynamic range amplifier, and longer battery life—Apple says up to six hours of listening time and four hours of talking, plus four additional charges from the case. These are also part of the MagSafe ecosystem.
The AirPods 3 are available now for $179.

Finally, Apple rolled out its HomePod mini lineup in three new color options, including blue, yellow, and orange, to go along with gray and white. These are the same HomePod mini speakers Apple introduced last year, just now in a wide color palette.
As with before, Apple's smart speakers stand 3.3 inches tall and have a spherical shape. They work with Siri and have smart home capabilities, a tinted touch surface on the top, a mesh fabric wardrobe, and an Apple S5 chip to tune the music output.
The HomePod mini continues to be available for $99, including the new color options.