Apple has struggled to get its foot in the door with the HomePod. When the smart speaker was first announced, it was priced at $349, and was later reduced to $299. However, it can regularly be found on sale for $199. But even that hasn't been enough to result in any meaningful market share for Apple.

The company hopes to change this with the HomePod mini, which brings most of the good stuff found in the larger HomePod, but in a smaller form-factor. The new HomePod mini features a single main driver, two passive radiators and an acoustic waveguide that is mounted in the bottom of the speaker housing.

As the rumors predicted, the HomePod mini is powered by the S5 SoC, which was first introduced in the Apple Watch Series 5. The SoC is tasked with using computational models to adjust your playing music at up to 180 times per second. And as you might expect, you can link up multiple HomePod minis (or mix them with the original HomePod) to create stereo sound (when placed in the same room), or just spread music throughout your house. 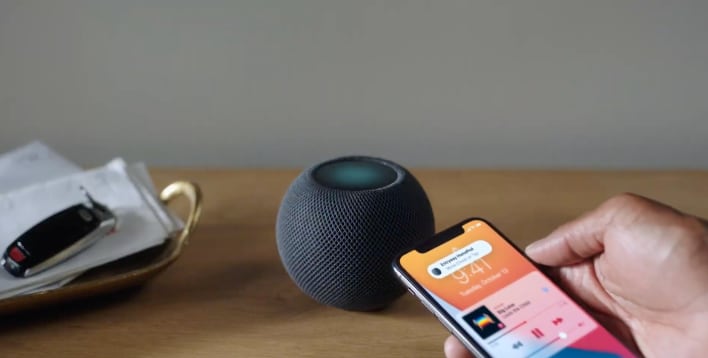 Paired up with the S5 is the U1 chip that was first introduced with the iPhone 11/iPhone 11 Pro family in 2019. The U1 will make Handoff easier and more seamless when you want to transfer music from your iPhone to a HomePod mini and vice versa.

Compared to the more cylindrical HomePod, the HomePod mini features a spherical shape which is lopped off at the top to accommodate the display. However, it still features a mesh fabric exterior like its predecessor.

Apple says that the new HomePod mini will be available for preorder on November 6th, and will begin shipping November 16th priced at $99 to better compete with the likes of the Amazon Echo and Google Nest Audio.