It was a little over a year ago when Apple announced plans to inject its Mac systems with its own custom Apple Silicon based on Arm, kicking Intel and its x86 chips to the curb in the process. What was said to be a two-year transition plan began in earnest with the M1 system-on-chip. That's officially a last-gen part now, with Apple today having introduced its upgraded M1 Max and M1 Pro.

Apple's M1 Max Is Its Biggest And Most Powerful Silicon

Apple's hype train is going full steam ahead with its updated custom silicon. It now has a mini-array of M1 chips, with the latest additions coming with the promise of big performance uplift, as well as gains in power efficiency. Measured on their own, the two new slices of silicon look like beasts. But this is Apple, and it couldn't resist claiming the M1 Max and Pro all but destroy the competition. 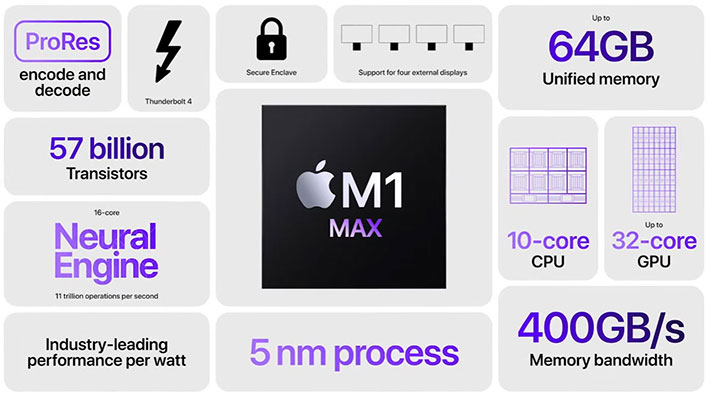 Let's start with the M1 Max, Apple's new flagship silicon. It's built on a 5-nanometer manufacturing process (undoubtedly from TSMC) and packs 57 billion transistors, which is 3.5 times more than the 16 billion transistors in the M1.
This is the largest chip Apple has ever built, and the most powerful. It features a 10-core design comprised of eight high performance cores and two lower power cores. There's also a 16-core neural engine onboard, and up to 32 GPU cores to deliver a four-fold increase in graphics performance compared to the M1 (which we spent some time with in our Mac mini 2020 review), Apple says. 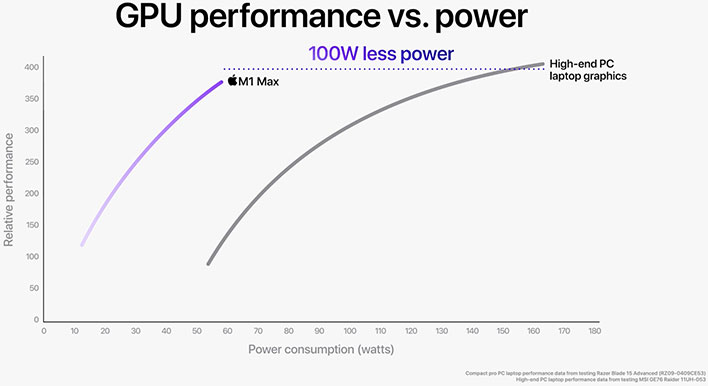 Apple of course isn't content to simply compare the M1 Max to its own previous generation silicon. According to Apple, the M1 Max's 32-core GPU delivers graphics performance comparable to a high-end PC laptop (specifically, the Razer Blade 15 Advanced, as noted in the fine print) at 40 percent less power. And next to a potent laptop like MSI's GE76 Raider with a mobile GeForce RTX 3080, it purportedly offers similar graphics performance at 100W less power.
"This means less heat is generated, fans run quietly and less often, and battery life is amazing," Apple says of its M1 Max-powered MacBook Pro.

That is quite the bragging point, if true, and if it holds accurate in more than just one or two cherry-picked benchmarks. We won't know until the M1 Max lands in the wild and undergoes testing and benchmarking outside of Apple's own labs.
In addition, Apple says the M1 Max bolsters the on-chip fabric and doubles the memory interface for up to 400GB/s, which is six times more than the M1. It can be configured with up to 64GB of fast unified memory.

Apple also had some big claims for the M1 Max's little brother, the M1 Pro, now the middle sibling among the M1 family. Like the M1 Max, the Pro variant is built on a 5nm process and sports a 10-core CPU, to wring up to 70 percent more performance compared to the M1. And compared to the "latest 8-core PC laptop chip," Apple says it is 1.7 times faster. 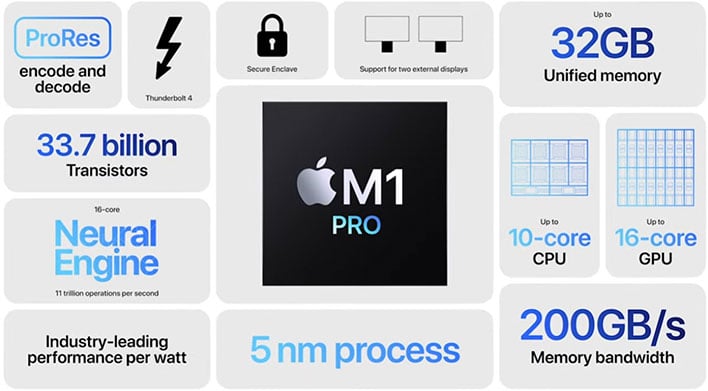 While not quite as beastly as the M1 Max, the M1 Pro still wields an impressive spec sheet, with 33.7 billion transistors, the same 16-core neural engine, up to 32GB of unified memory, up to a 16-core GPU, and 200GB of memory bandwidth. According to Apple, "even the most demanding tasks, like high-resolution photo editing, are handled with easy by the M1 Pro."
What about performance and power efficiency compared to x86 alternatives? Next to an 8-core Intel laptop (MSI Prestiges 14 Evo), Apple claims the M1 Pro consumes 70 percent less power. It's the bees-knees, in other words, from Apple's vantage point.
Some other notable features of both the M1 Max and M1 Pro include a new display engine to drive multiple external displays, additional integrated Thunderbolt 4 controllers for more I/o bandwidth, onboard security enhancements (Apple's latest Secure Enclave), and a custom image signal processor to help enhance images and videos.
"The Mac is now one year into its two-year transition to Apple silicon, and M1 Pro and M1 Max represent another huge step forward. These are the most powerful and capable chips Apple has ever created, and together with M1, they form a family of chips that lead the industry in performance, custom technologies, and power efficiency," Apple says.
We shall see if reality comes close to these bold claims and hype, soon.