The global games market is already bigger than movies and music combined, and some estimates have it skyrocketing to a $257 billion business by 2025. It's no wonder Apple wants a bigger piece of the gaming pie. Lest there was any doubt, Apple announced a couple of gaming technologies for the Mac at its WWDC 2022 event this week, including its own upscaling solution.
Upscaling has emerged as the trendy option to squeeze more performance out of GPUs, and all the major players have embraced it to some extent. NVIDIA's solution is called Deep Link Super Sampling (DLSS), AMD's is FidelityFX Super Resolution (FSR), and Intel's Xe Super Sampling (XeSS).
None of the three are exactly the same, but the general idea is to render a game at a lower resolution and then upscale it to a higher resolution using various techniques. The upshot is you can play a game at, say, 1440p or 4K with less of a performance hit than if tasking the GPU with rendering a title at those resolutions natively. 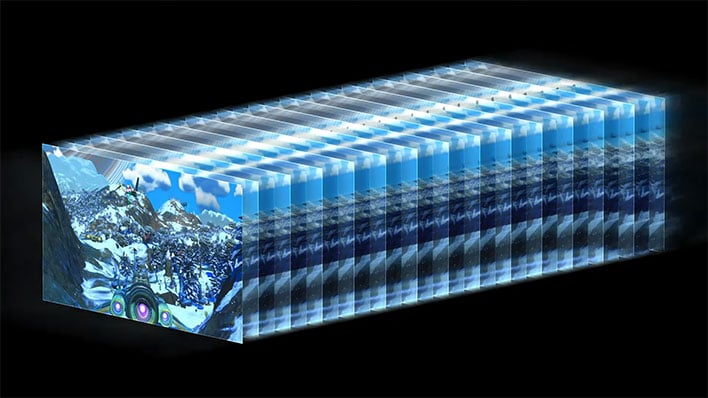 Well, we can add Apple's newly announced MetalFX to the pile. During the company's WWDC 2022 keynote, Apple's senior director of GPU software, Jeremy Sandmel, talked a bit about MetalFX saying it's part of Metal 3, which is the software that powers hardware accelerated graphics on all of Apple's platforms.
"Gaming at maximum resolution and quality looks awesome, and to help developers increase the performance of realistic and immersive graphics, we're introducing MetalFX upscaling, which enables developers to render rich, visually complex scenes even faster," Sandmel said.
Sandmel didn't get deep into the weeds of MetalFX, though he did say this is a spatial upscaling technology that leverages temporal anti-aliasing to spice up smaller and less compute intensive frames. He also confirmed that one of the first games to take advantage of MetalFX is No Man's Sky, which is slated to arrive on Mac and iPad this fall.
In addition to MetalFX, another part of Metal 3 is a new "fast resource loading API" to speed up game loading times. We don't have a ton of technical details on this either, but the intent is to minimize wait time in games "by providing a more direct path from the storage to the unified memory system so the GPU can more quickly access high-quality textures and buffers without waiting."
It sounds similar to Microsoft's DirectStorage API for Windows, which is based on the Velocity Architecture that's infused on the Xbox Series X|S. We'll get to see this in action when Resident Evil Village arrives on Mac later this year as well.
"This really is a new day for gaming on the Mac," Sandmel says.
You can check out the keynote to see both games in action running on macOS.