As more revamped MacBook Pro models end up in the hands of consumers and a wider swath of reviewers, we're getting a broader view of performance. Namely, of how Apple's M1 Max and M1 Pro perform in different types of workloads an benchmarks. To that end, both chips have now left and impressive mark on PassMark.
A current snapshot of PassMark's single-threaded CPU scores shows Apple's latest silicon sitting atop the stack, ahead of x86 chips like Intel's Core i9-11900K (Rocket Lake) and AMD's Ryzen 9 5950X (Zen 3). Have a look... 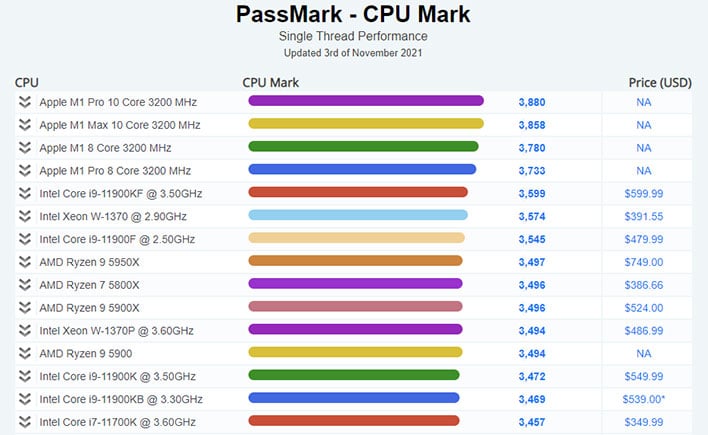 Interestingly, the M1 Pro actually claims the top spot with a score of 3,880, edging out the burlier M1 Max, which scored 3,858. The disparity is close enough to be considered within the margin of error, plus they're both rocking 10-core CPUs clocked at 3.2GHz, so we would expect them to score about the same in this test.
What's more interesting is how Apple's newest silicon beats the best that Intel and AMD have to offer. At least for now—official 12th Gen Alder Lake benchmarks should be landing soon (Intel already announced Alder Lake, and they initial CPUs release to retail on November 4), while AMD is working to get its Zen 3+ chips out the door, with stacked 3D V-cache in tow (eventually followed by Zen 4).
The M1 Max and M1 Pro are custom designs based on Arm's IP. Apple's flagship M1 Max packs 57 billion transistors, a 10-core CPU, up to a 32-core GPU, a 16-core neural engine, up to 64GB of unified memory, and up to 400GB/s of memory bandwidth. The M1 Pro, meanwhile, wields 33.7 billion transistors and can be had with either an 8-core or 10-core CPU, up to a 16-core GPU, the same 16-core neural engine, up to 32GB of unified memory, and 200GB/s of memory bandwidth.
"The Mac is now one year into its two-year transition to Apple silicon, and M1 Pro and M1 Max represent another huge step forward. These are the most powerful and capable chips Apple has ever created, and together with M1, they form a family of chips that lead the industry in performance, custom technologies, and power efficiency," Apple says.
Bold claims for sure, and the latest PassMark results give Apple ammunition to fire off such comments. It will be interesting to see if Alder Lake leaps ahead in PassMark's single-threaded performance test—we'll find out soon enough.