I was pleasantly surprised by Apple's recent iPad Air announcement, with the 5th generation model getting the same spunky M1 processor that's found in the iPad Pro (and 5G connectivity too boot, albeit just sub-6GHz). The Mac Studio with its 20-core M1 Ultra option is intriguing, too. Looking ahead, though, Apple's iPhone 14 launch could leave its fan base frustrated if a respected analyst's prediction ends up being true.
Over the weekend, notorious Apple analyst Ming-Chi Kuo posted a couple of tweets providing a bare outline of the iPhone 14 series. In this first tweet, Kuo suggested Apple's naming rules will remain intact, meaning later this year we'll see the unveiling of a 6.1-inch iPhone 14, 6.1-inch iPhone 4 Pro, 6.7-inch iPhone Max, and 6.7-inch iPhone Pro Max.
No surprises there, but in his next tweet posted a minute later, he outlined a potentially controversial design decision. 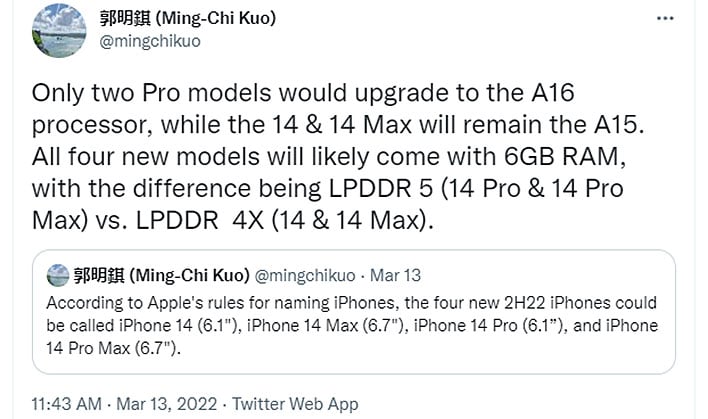 "Only two Pro models would upgrade to the A16 processor, while the 14 & 14 Max will remain the A15. All four new models will likely come with 6GB RAM, with the difference being LPDDR 5 (14 Pro & 14 Pro Max) vs. LPDDR 4X (14 & 14 Max)," Kuo wrote.
Not all of Kuo's predictions always come to pass, but he has been far more reliable than random rumors you might encounter on the web. And if this one comes true, it would the first time in nearly a decade that Apple separated its flagship iPhone lineup by the type of processor inside. The last time was in 2013 when the iPhone 5S debuted with an A7 chip and the iPhone 5C got an A6 SoC.
The added RAM would be nice (if that holds true as well), regardless of whether it's LPDDR4X or LPDDR5, but recycling the A15 Bionic for another round could make it tough to justify an upgrade from the iPhone 13 to the iPhone 14 or iPhone 14 Max (for those who like to upgrade every generation). It just depends on what other features make the cut.
In all reality, today's top phone models (Android or iPhone) are plenty fast for most tasks. If given two identical handsets, one with an A15 Bionic and the other with an A16 Bionic, I imagine most people would be hard pressed to tell the difference outside of running some benchmarks. And upgrading to a new phone every year is definitely more of a luxury than a necessity. Even so, some people are bound to be disappointed if Apple goes this route.
It's also worth noting that even when Apple uses the same base SoC, the specs are not always the same within the entire lineup. For example, the A15 Boinic in the iPhone 13 Pro sports more GPU cores than the iPhone 13 (and more RAM, too), so there's some performance separation and not just a distinction in features.
We'll know later this year how things shake out—look for Apple to unveil its iPhone 14 lineup this fall.