In addition to rolling out upgraded iPad Air and iPhone SE devices today, Apple also announced an entirely new Mac desktop and accompanying display, and a new flagship chip, a designation that previously applied to the M1 Max. Not anymore—the M1 Ultra now qualifies as Apple's top home-brewed silicon, and it comes by way of an innovative packaging architecture.
It was previously rumored that Apple would make use of a die-to-die interconnect to offer a burlier version of the M1, and that's precisely what it has done. During its Peek Performance event today, Apple referred to this as a secret feature of the M1 architecture. It's calling this UltraFusion, and it essentially enables connecting the die of two M1 Max chips in the same package. 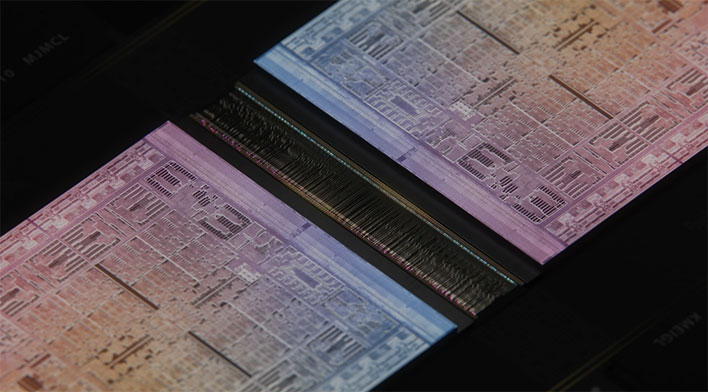 "The most common way to scale performance is to connect two chips through a motherboard, which typically brings significant trade-offs, including increased latency, reduced bandwidth, and increased power consumption. However, Apple’s innovative UltraFusion uses a silicon interposer that connects the chips across more than 10,000 signals, providing a massive 2.5TB/s of low latency, inter-processor bandwidth—more than 4x the bandwidth of the leading multi-chip interconnect technology," Apple explains.
This approach allows the M1 Ultra to be recognized by software as a single chip, so developers don't need to rewrite their code. The end result is a 20-core CPU with 16 high performance cores and four efficiency cores, for what Apple claims is a 90 percent multi-threaded performance advantage over Intel's Core i9-12900K Alder Lake CPU. 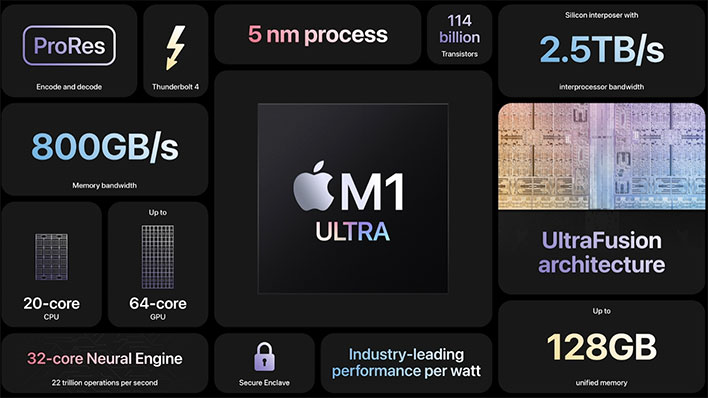 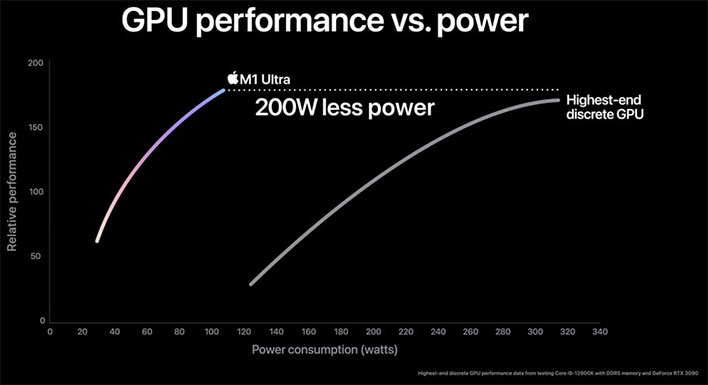 For graphics, the chip is armed with a 64-core GPU (eight times the size of M1), which Apple claims delivers faster relative performance than NVIDIA's GeForce RTX 3090 at 200W less power. Other features include a 32-core Neural Engine for AI processing that runs up to 22 trillion operations per second, support for up to 128GB of unified memory, and 800GB of memory bandwidth.
This is a big upgrade to the M1 family, and Apple is wasting no time putting it to us. Which brings us to the Mac Studio and its accompanying Studio Display. 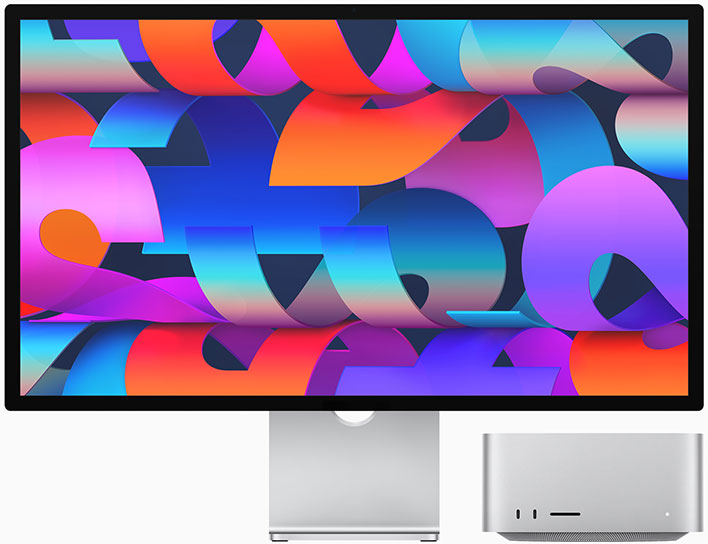 Apple today unveiled an entirely new Mac display, the Mac Studio, which at first glance looks like a chunkier version of the Mac mini. It's built from a single aluminum extrusion with a square footprint measuring 7.7 inches, and standing just 3.7 inches tall. So it's a compact desktop that should fit under most displays, and it's not lacking in power.
Inside the Mac Studio is the aforementioned 20-core M1 Ultra with 114 billion transistors. Apple claims it delivers 3.8x faster CPU performance than the fastest 27-inch iMac, up to 90 percent better performance than a Mac Pro with a 16-core Xeon chip, and up to 4.5x faster graphics performance than the 27-inch iMac. There's also an M1 Max option.
"Mac Studio with M1 Ultra can play back 18 streams of 8K ProRes 422 video, which no other computer in the world can do. Mac Studio also shatters the limits of graphics memory on a desktop, featuring up to 64GB of unified memory on systems with M1 Max and up to 128GB of unified memory on systems with M1 Ultra. Since the most powerful workstation graphics card available today only offers 48GB of video memory, having this massive amount of memory is game changing for pro workloads," Apple says.

As for storage, it can be configured with up to an 8TB SSD operating at up to 7.4GB/s. And for connectivity, the back of the unit houses four Thunderbolt 4 ports, a 10Gb Ethernet port, two USB-A ports, and HDMI output, and an audio jack. It also features Wi-Fi 6 and Bluetooth 5.0 for wireless connectivity.
Of course, Apple would love it if buyers paired the Mac Studio with its new Studio Display, a 27-inch monitor with a 5K Retina screen. This pairs an "all-screen screen design with narrow borders" with a slim, all-aluminum enclosure. And yes, it comes with a stand (unlike the Pro Display XDR) that supports tilt adjustments. If you want to make height adjustments, though, a tilt/height adjustable stand costs extra, because of course.
Other features include three USB-C ports, built-in 12MP ultra wide camera, a three-microphone array, six-speaker sound system, 600 nits brightness, and an A13 Bionic chip to drive the camera and sound capabilities.
The Mac Studio starts at $1,999 ($1,799 for education) and the Studio Display starts at $1,599 ($1,499 for educiation).