Sometime on Wednesday, AMD’s online product resource library momentarily revealed a quartet of Ryzen 7000 CPUs. Among the CPUs ‘confirmed’ by this lapse were the AMD Ryzen 9 7950X and 7900X, Ryzen 7 7700X, and Ryzen 5 7600X. There were no other codename Raphael reveals, though of course the full range is expected to be far broader than just four CPUs.

It is interesting to note that the four models listed correspond to the launch lineup of Ryzen 5000 CPUs, one generation up. There is an exception though—there wasn't a Ryzen 7 7800X mentioned in short-lived leak. It could mean this particular CPU will be a latecomer, but jumping to this conclusion would probably be over thinking a leak, which is probably down to carelessness (or AMD removed the listings before it was finished updating them for Zen 4). Also, we mustn’t take this leak as a solid sign of the upcoming launch lineup.
The above AMD Raphael, or Ryzen 7000 series CPUs, leak doesn’t feature any surprises for industry watchers. As observed above, we could almost simply increment the previous gen launch models by 1000 to get here. It would have probably been more exciting to see a Ryzen 9 7999X3D or some other wild model number, but AMD might still cause excitement if the Zen 4 architecture’s performance and efficiency can live up to the hype. 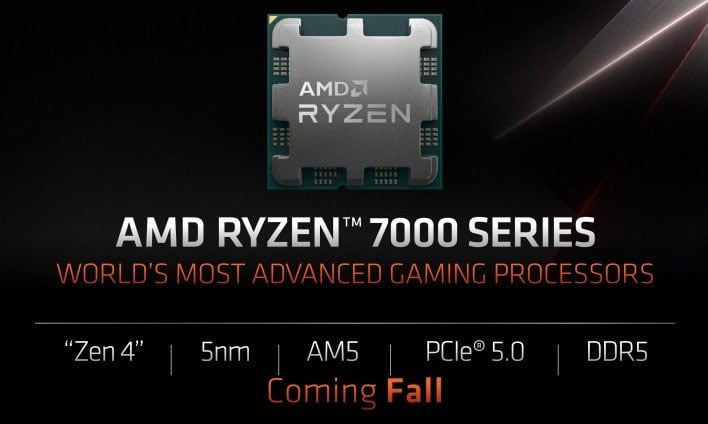 The quick sleuths at VideoCardz were quick on the hoof to spot and catch the leak from AMD’s official product library, but we must look elsewhere for some outline specs of the upcoming Raphael CPUs. Back in mid-July, we saw evidence of an AMD Ryzen 5 7600X hexacore CPU being tested in Basemark. We also recently learned about AMD Ryzen 7900X3D and 7800X3D launching on an accelerated timescale.
It is widely expected that Ryzen 7000 CPUs will launch next month, with availability in September. AMD has scheduled an official AM5 motherboard event for August 5, so the wheels are definitely rolling.