Leaked documents arising from the recent Gigabyte security breach is the gift that keeps on giving. Not that we condone such actions in the slightest, but now that there are interesting tidbits about unreleased products out in the wild, we can't bury our heads in the sand, either. And so with that said, the leaked documents seemingly confirm a previous rumor suggesting all of AMD's next-generation Zen 4 CPUs will have integrated graphics.
This is outlined in yet another published document from when hackers pilfered Gigabyte's servers, who then tried extort a ransom from the company. Those efforts were apparently unsuccessful, as the hackers proceeded to publish a trove of stolen data online, containing documents outlining various details about unreleased products from multiple companies, including AMD and Intel.
In this case, the folks at Chips and Cheese got their mitts on the data dump and posted a handful of diagrams and other information related to Zen 4. One of the slides details the upcoming AM5 socket that will replace AM4, and what features it will be compatible with, like DDR5 memory and so forth. This is also the chart that suggests all Zen 4 processors will have integrated graphics. 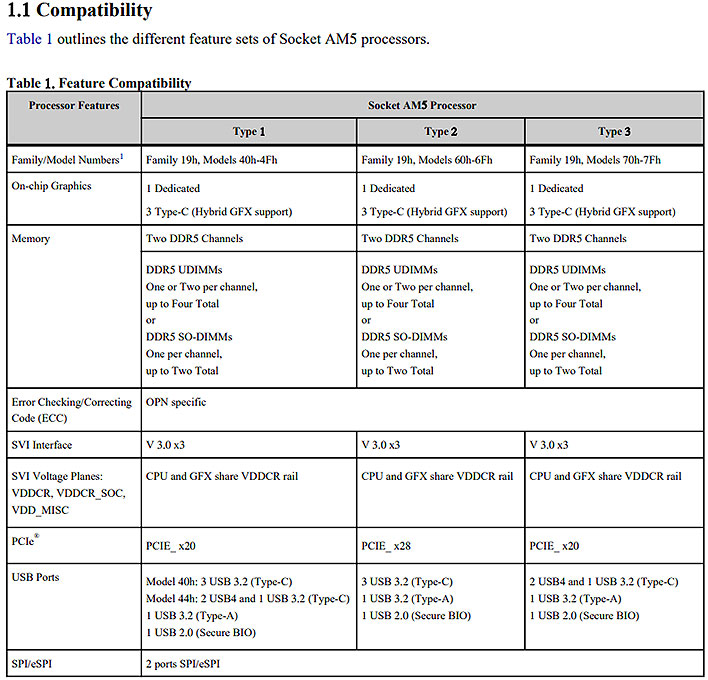 As you can see above, the chart highlights three types of "Family 19h" processors, which are Zen 4 chips. In each case, it points out on-chip graphics support. So in other words, integrated graphics will not be the exclusive domain of dedicated APUs as part of the Ryzen G-series, but available on all product lineups, to some extent.
We say "some extent" because the document also notes, "Some OPNs...may not support GFX." We read this to mean that on some processor SKUs, the integrated graphics will still be there, but will be disabled, just as Intel does with its F and KF processor models.
Assuming the information is accurate, this will almost definitely entail the pairing of RDNA 2 graphics with Zen 4. This is something that has been previously rumored, with a supposedly leaked roadmap showing AMD's next-gen CPUs pairing Zen 4 with "Navi2" (RDNA 2).
There is still plenty of time speculate. Just a few weeks ago, AMD CEO Dr. Lisa Su reiterated that Zen 4, which is being built on a 5-nanometer manufacturing process, is on track to launch in 2022. Same goes for AMD's next-generation RDNA 3 graphics products.
Zen 4 will also bring support for DDR5 memory, just as Intel is doing with its upcoming Alder Lake processors. However, the same set of leaked documents seemingly confirm that AMD will stick with PCI Express 4.0 on the consumer side, and only support PCI Express 5.0 on its next-gen EPYC processor. That really shouldn't matter a whole lot in terms of real-world usage (for consumers), but if that's the case, it does give Intel bragging rights.
It's also expected that Zen 4 will hold the line with up to 16 cores and 32 threads among the mainstream lineup. Combined with a rumored 20 percent lift in IPC performance, Zen 4 could be a huge upgrade over Zen 3.