AMD has not exactly been shy about mentioning its upcoming Zen 4 architecture, or even providing some high level details on occasion. For example, we know it is has been designed on a 5-nanometer manufacturing process, and is on the roadmap for a 2022 debut. But AMD certainly knows more than it typically shares, and some additional details have seemingly been confirmed in a recently leaked document.
Leaks and rumors should typically not be viewed as confirmed information. In this case, however, the documents appear to come from AMD, and were made public after hackers infiltrated Gigabyte, stole some data, and tried to extort a ransom from the company. It does not appear as though Gigabyte paid the ransom, and the hackers posted at least some of the data online.
The data contains confidential information relating to unreleased products by various manufacturers, including AMD and Intel. And one of those documents is a diagram for AMD's upcoming AM5 socket, that will replace the longstanding AM4 socket. Have a look... 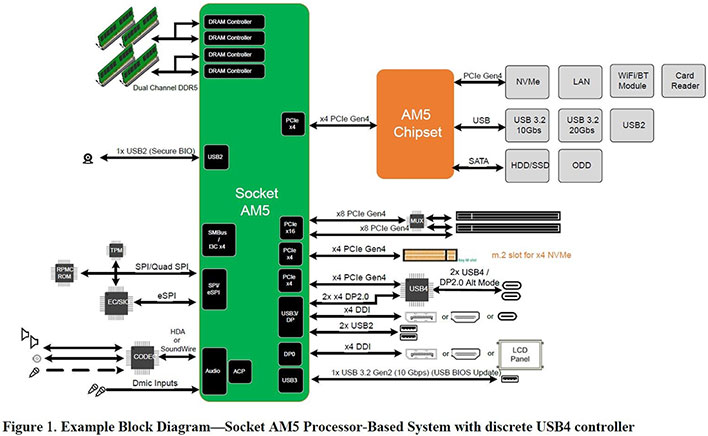 The diagram serves as further confirmation that Zen 4 will leverage next-gen DDR5 memory. Of course, we already knew this—memory makers have even suggested this will be the case, when getting a head start on announcing DDR5 RAM products for next-gen platforms, including Intel's Alder Lake CPUs and, sometime later, Zen 4.
A rumor that's been going around is that AMD will stick with PCI Express 4.0 support on consumer platforms for Zen 4, but embrace PCI Express 5.0 on its Zen 4-based EPYC processors for data centers. This leaked AMD AM5 document seemingly confirms those plans.
It's worth reiterating that AMD has already said its next-gen EPYC processors based on Zen 4 (codenamed Genoa) "will support next-generation memory and I/O sub systems for AI and HPC workloads." So that would seem to suggest that PCIe 5.0 is headed to Genoa.
Whether or not this ends up being a big deal remains to be seen. On the graphics side, the PCI Express bus has not really been a bottleneck for performance on consumer platforms, so another round of PCIe 4.0 shouldn't negatively impact gaming.
Where it come into play to some extent is with drive makers and SSD controller outfits (like Phison) pushing the envelope. The fastest NVMe SSDs on the market are coming close to saturating the available bandwidth afforded to them, through four lanes of PCIe 4.0 traffic. Not accounting for overhead, PCIe 4.0 x4 allocates around 8,000MB/s (8GB/s) of bandwidth. Some SSDs already boast rated sequential reads north of 7,000MB/s, like PNY's XLR8 CS3140, which is rated to hit 7,500MB/s.
Of course, for the average user, that kind of speed largely goes untapped. But there are situations where ultra-fast SSDs can come into play, and more could be on the way if game developers make a bigger effort to utilize them (Microsoft's DirectStorage API offers incentive, as does the fact that both the PlayStation 5 and Xbox Series X are equipped with fast PCIe 4.0 SSDs).
Really though, it could mostly come down to bragging rights. And just as AMD beat Intel to the punch with PCIe 4.0, it looks like the script will be flipped for PCIe 5.0.