Zen 3 is a force to be reckoned with, assuming the various benchmark leaks are even remotely accurate. Not that we are surprised—Zen 2 is one heck of a CPU architecture, so it stands to reason that Zen 3 will be as well. How much better is the question, and some newly leaked scores for a Ryzen 9 5950X may help answer it.
This is another validated CPU-Z benchmark run, like the one from earlier this week that highlighted the performance of the Ryzen 7 5800X. To recap, it put the smack down on both Intel's Comet Lake CPUs, and AMD's own Ryzen 3000 series. Or to be more specific, it's single-threaded score came in 11 percent higher than an Intel Core i7-10900K, and 24 percent higher than the Ryzen 9 3950X.
The Ryzen 9 5950X is a higher end CPU—the highest on the Zen 3 totem pole, as a matter of fact. It is equipped to hammer workloads with 16 physical cores and 32 threads, with a 3.4GHz base clock, 4.9GHz max boost clock, and 64MB of L3 cache. Like the next two chips that sit beneath it—Ryzen 9 5900X and Ryzen 7 5800X—it has a 105W TDP.
How does it perform? Well, someone validated a CPU-Z benchmark run showing it scoring 658 in the single-threaded benchmark, and 12,366 in the multi-threaded test. Let's start by comparing the single-threaded score to other CPUs... 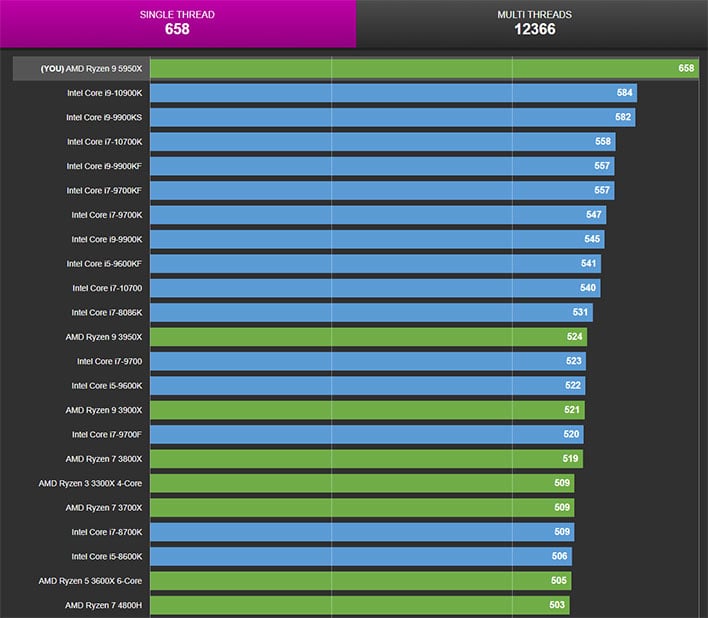 As would expect, it outpaces the other chips, just like the Ryzen 7 5800X did earlier this week. Except the performance gap is a little wider here—the Ryzen 9 5950X beats the Core i9-10900K by around 12.7 percent, and outpaces the Ryzen 9 3950X by about 25.6 percent, the latter of which exceeds AMD's claimed 19 percent IPS uplift (note that single-thread performance benchmarking and IPC are not necessarily the same thing).
Now let's turn our attention to the multi-threaded comparison...

The sample size is much smaller when narrowing the field to CPUs with 32 threads, but no less interesting. Compared to the Ryzen 9 3950X, the new flagship chip is right around 13.8 percent faster in this particular benchmark. This widens to a hair below 41 percent if comparing against the Core i9-9960X, a Skylake-X processor launched two years ago.
Different numbers, same story—Zen 3 looks like a monster in the early going. If reviews show the same results, and if the Radeon RX 6000 series stacks up as favorably as AMD's slides indicated during yesterday's launch event, going all-in with AMD's hardware on a new build could pay some serious big performance dividends.