November will be here before we know it, and with it comes the retail availability of AMD's latest generation Ryzen 5000 series, based on Zen 3. Then we will have a clear picture of whether the new chips truly deliver upon AMD's claimed 19 percent IPC (instructions per clock) uplift over Zen 2. As we wait, more slightly-early benchmarks have emerged, at a familiar place—the Geekbench database.
We have high hopes for Zen 3, based on what AMD is claiming, combined with the spattering of leaked benchmarks that have emerged since the Ryzen 5000 series was officially announced. We always have to take such things with a big pinch of salt, though generally, the closer to retail availability we get, the more reliable the leaked data. Still, the standard disclaimer applies. 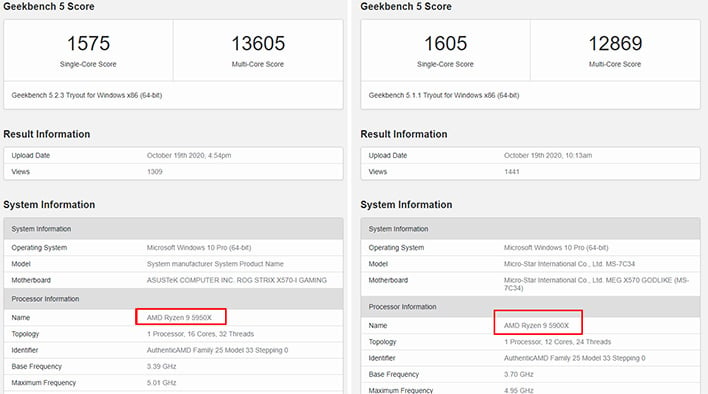 The single-core scores are relatively close between the two, with the Ryzen 9 5950X posting 1,575 and the faster-clocked Ryzen 9 5900X pulling slightly ahead at 1,605. In the multi-core test, the Ryzen 9 5950X scored 13,605 and the Ryzen 9 5900X managed 12,869.
Comparing to other scores in the database gets a little tricky (and unfortunately we do not have a collection of Geekbench version 5 results), because a lot of the entries represent overclocked systems. As such, you can find higher scores applied to the Ryzen 9 3950X. Likewise, you can find ones that are much lower.
That said, one of the recent scores for a 10-core/20-thread Intel Core i9-10900K is 1,403 for the single-core test and 10,397 for the multi-core test. The single-core test is of more interest, and it shows AMD's processors scoring about 14 percent higher. And compared to the Ryzen 9 3950X, if we weed out the unusually high results, the Ryzen 9 3950X is right around AMD's claimed 19 percent performance uplift in single-core scoring, and around half that in multi-core scoring. 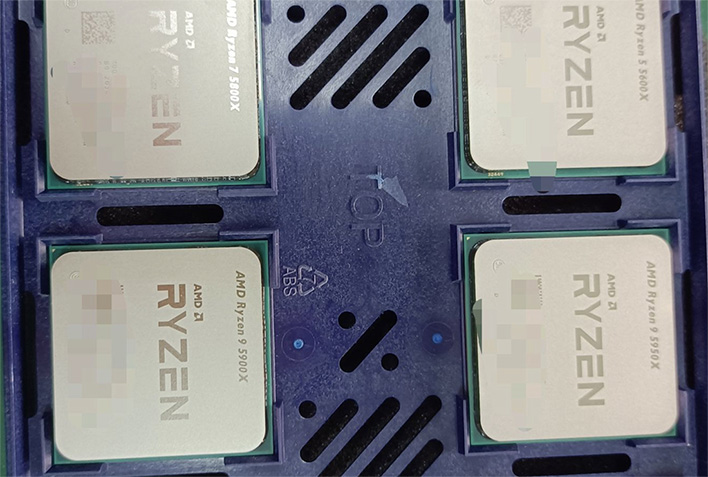