Are we enjoying the Chip Wars of 2020 yet? Things are just getting started, folks. AMD is talking a big game about Zen 3 and its Ryzen 5000 series, which will debut to retail next week. More than just lip service, multiple leaks suggest AMD has a real winner on its hands. This is evidenced yet again in a validated CPU-Z run underscoring the potential performance of the Ryzen 7 5800X.
The Ryzen 7 5800X is one of four announced Zen 3 processors for the consumer desktop segment. It is only second from the rear, ahead of one other CPU and behind two higher end models, yet appears to pack quite the punch. Before we get to the performance figures and how it compares to Intel, let's have a quick rundown of the Ryzen 5000 series...
When announcing the lineup, AMD said its Zen 3 architecture offers a 19 percent jump in instructions per clock (IPC) compared to Zen 2. That essentially means that everything else being equal, a Zen 3 part at any particular clockspeed will perform 19 percent better than a Zen 2 CPU at the same clockspeed (it's a little more nuanced than that, but that is the generally takeaway).
Does it really deliver? We'll find out in time. As we wait, there is an interesting CPU-Z entry for a Ryzen 7 5800X that shows it scoring 650 in the utility's built-in single-threaded benchmark, and 6,593 in the multi-threaded benchmark.
We are mostly interested in the single-threaded score, because that gets us closer to evaluating the architecture's performance to other chips, both from AMD and Intel (note that single-threaded performance and IPC are not the same thing). Here's a look... 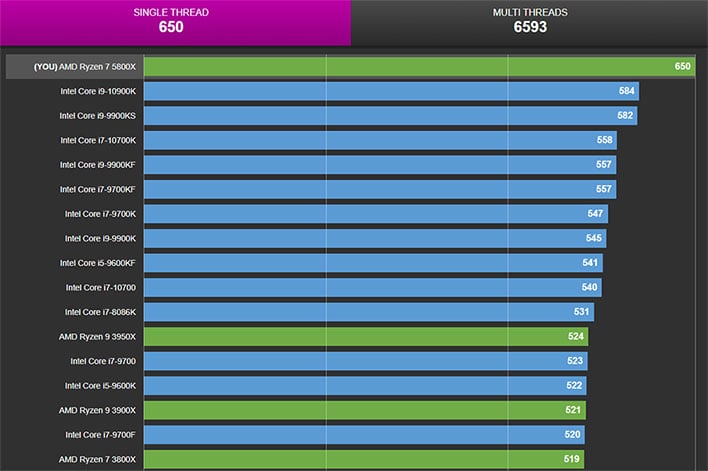 Compared to the mighty Ryzen 9 3950X, the Ryzen 7 5800X scored 24 percent in this benchmark—very impressive, considering the Ryzen 7 5800X's standing in the Zen 3 hierarchy. The Ryzen 9 3950X has a slower base clock (3.5GHz) but the same max boost clock (4.7GHz), and twice as much L3 cache (64MB versus 32MB).
Also interesting is how the Ryzen 7 5800X stacks up to Intel's Core i9-10900K in this benchmark. It beat Intel's Comet Lake CPU by more than 11 percent. The Core i9-10900K, by the way, is generally $80+ more (it's available on Best Buy for $530).
It is also worth pointing out that this was accomplished on a testbed using DDR4-2400 memory. AMD's Ryzen processor generally perform best when paired with DDR4-3600 memory. Well, technically the "performance sweet spot," as AMD says, is DDR4-3733 where the Infinity Fabric is still tied to the memory clock at a 1:1 ratio, but DDR4-3600 kits are more common. I'm not sure how much this plays a role in CPU-Z's baked in benchmark, but if it does factor into the equation, the gap would be even bigger with faster memory.
Now let's have a look at the multi-threaded performance... 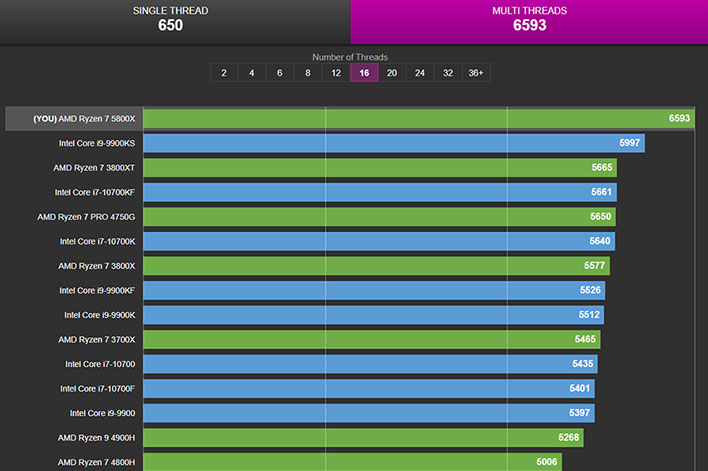