The Ryzen 7 5800X3D is a fascinating processor. AMD stacked an extra 64MB of L3 cache, known as 3D V-Cache, onto a Ryzen 7 5800X, giving it immense gaming performance in some titles despite a small drop in clock rate versus the stock model. A lot of folks are holding off on Zen 4 until they can buy one of AMD's new chips with the extra cache, and those chips are coming—possibly as soon as January 23rd, if QuasarZone is to be believed.


Here's some context for you: back in September, AMD released its Zen 4-based Ryzen 7000-series desktop processors. They have great single-threaded performance (thanks in part to their sky-high clock speeds), and that means excellent gaming performance competing well against Intel's 12th- and 13th-gen parts.
However, throughout our benchmarks, there was one strange system showing up time and again near the top of the charts: the previous-generation Ryzen 7 5800X3D. A lot of people saw those benchmarks, balked at the high platform price of AMD's new CPUs, and ran out to buy a 5800X3D. As a result, those CPUs are virtually unavailable at retail now.


Of course, the Ryzen 7 5800X3D isn't super fast in every game, owing to its previous-generation Zen 3 CPU core and relatively modest clock rate. The best solution would be a Zen 4 CPU with 3D V-cache. It's no surprise to hear that these are on the way, but Korean hardware site QuasarZone shared what it purports to be some insider information on the new CPUs. 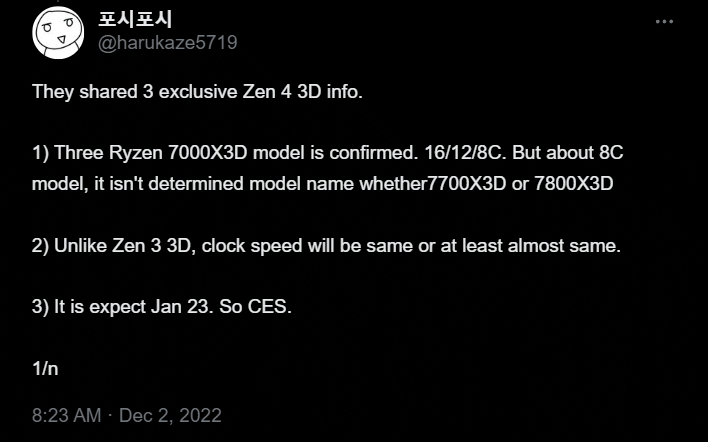 Assuming the translation from 포시포시 (@harukaze5719 on Twitter) is accurate, QuasarZone says that there are three models of Zen 4 X3D CPUs coming: eight-core, twelve-core, and sixteen-core. The higher-core-count CPUs will likely be known as the 7900X3D and 7950X3D, but the leakers say that the model name of the eight-core chip is undetermined between "7700X3D" and "7800X3D".


That decision may come down to the final clock speed. The Ryzen 7 5800X3D had to drop clocks slightly (versus the original recipe) to remain stable, but the leakers say that that won't be the case for the Zen 4 CPUs, and that they'll instead be clocked "the same or at least almost the same." That's good news for people who want great gaming performance without sacrificing CPU compute throughput, which is more important for tasks like media encoding.
포시포시 also translated some information from QuasarZone that the site marked as speculation. The image above is the average of five games benchmarked on the respective CPUs, although it should be noted that the Ryzen 7 5800X is locked to 4.4 GHz. That's to isolate the effect of the 3D V-Cache on the 5800X3D's performance.

Then, taking those numbers, the site applied them as an offset to the performance of the 7950X to see the theoretical performance of a Ryzen 9 7950X3D. Assuming the 7950X3D sees the same uplift as the 5800X3D, it looks like it will absolutely stomp the Core i9-13900K for gaming performance, but we're not completely confident in these results.


That's because one of the biggest benefits of the extra cache is improving effective memory bandwidth. For memory accesses that fall within the 96MB L3 cache of the Ryzen 7 5800X3D, it has drastically improved performance, and this helps work around some of the Ryzen family's memory performance weaknesses. The Ryzen 9 7950X was tested with very fast DDR5-6000 memory, though, and we're not sure if the impact of the 3D V-Cache will be as large in that case.

Perhaps the most interesting detail from QuasarZone is the hard date of January 23rd for Zen 4 X3D availability. That's not speculation—the leakers claim that the new CPUs will be available on that date, less than two months away from now. 포시포시 makes the reasonable assertion that this date means the CPUs will be announced at CES, which lines up with earlier rumors we've heard.

We're eager as anyone to get our hands on Zen 4 X3D, so hopefully these rumors are accurate. When we do get one, you'll know as soon as we can tell you, so keep checking HotHardware!