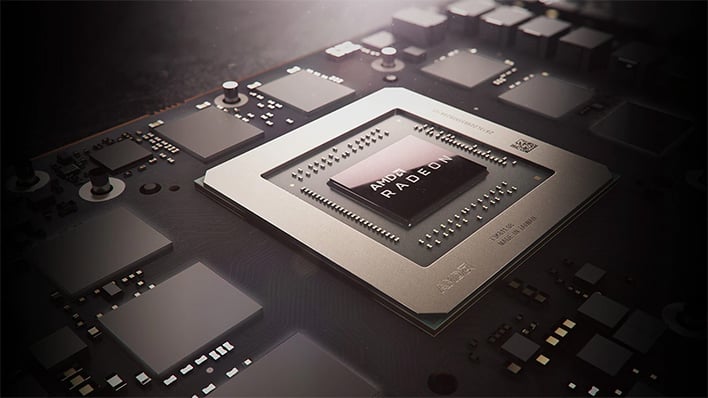 It is no secret that AMD is prepping a new generation of graphics cards based on its upcoming RDNA 2 architecture. We are all anxiously waiting to see what kind of performance the so called "Big Navi" variant delivers, which AMD has said will be a halo product. In the meantime, a leaker with a good track record claims Big Navi will arrive with 16GB of video RAM (VRAM) this year.
RDNA 2 (the second generation of AMD's Radeon DNA architecture) is set to make a splash this year, both inside upcoming game consoles—Microsoft's Xbox Series X and Sony's PlayStation 5—and on PC. At least some of the cards based on RDNA 2 will feature hardware support for real-time ray tracing, just as NVIDIA's GeForce RTX series does now.
Related leaks and rumors have been all over the place. However, Hassan Mujtaba at WCCFTech found some interesting posts on Chiphell by a user who goes by Wjm47196. The leaker seems to be a relatively reliable one, having in the past reported that Navi 10 would skip support for ray tracing and that AMD would provide more information about RNDA 2 and its GPU roadmap at CES 2020, among several other accurate leaks.
I can't find everything Wjm47196 supposedly said, but according to Mujtaba, one of the leaker's posts pegged the first graphics card based on Big Navi as having 16GB of VRAM. It's not entirely clear what type of memory AMD will use or what the bus width will be, though the leaker apparently mentions GDDR6 and 384-bit as a possibility.

Let's say all that is true. If the memory ran at 16Gbps, it would deliver 768GB/s of bandwidth. And at 18Gbps—which is possible on GDDR6—we would be looking at 864GB/s of bandwidth. To put that into perspective, the Radeon RX 5700 XT sports 8GB of GDDR6 RAM at 14Gbps on a 256-bit bus, for 448GB/s of memory bandwidth.
Some other interesting takeaways from the rumor roundup...
Whether any or all of that holds true remains to be seen, but it is all at least plausible. And of course AMD will be releasing Zen 3 CPUs this year as well, which has been confirmed to include consumer parts (Ryzen 4000 series for the desktop). All in all, it looks like AMD will end 2020 with a bang.