A newly published patent at the United States Patent and Trademark Office (USPTO) highlights an intriguing "Gaming Super Resolution" technology on tap from AMD, that could potentially give NVIDIA and its Deep Learning Super Sampling (DLSS) technology a run for its money. While nothing is certain, the patent describes what could be part of AMD's FidelityFX Super Resolution scheme for its Radeon RX 6000 series.
These types of technologies essentially aim to upscale images with minimal to no loss in image quality, or even output better looking scenes at higher resolutions, while dramatically lessening the load on the GPU. We have already seen this with NVIDIA, and as we have stated before, the latest implementation (DLSS 2.0) works marvelously.
AMD has yet to respond with its own upscaling technology, though it has said its eventual FidelityFX Super Resolution will work with any game and not be wholly dependent on machine learning. At least in theory—an FAQ for Metro Exodus Enhanced Edition states that it will not be gaining specific support for AMD's Super Resolution "as it is not compatible with our rendering techniques." So, we'll have to wait and see how it actually pans out.

In its newly published Gaming Super Resolution patent, AMD talks about the pitfalls of conventional super resolution techniques, and appears to take an indirect shot at DLSS.

"Conventional super resolution techniques include a variety of conventional neural network architectures which perform super resolution by upscaling images using linear functions. These linear functions do not, however, utilize the advantages of other types of information (e.g., non-linear information), which typically results in blurry and/or corrupted images," AMD explains.
"In addition, conventional neural network architectures are generalizable and trained to operate without significant knowledge of an immediate problem. Other conventional super resolution techniques use deep learning approaches. The deep learning techniques do not, however, incorporate important aspects of the original image, resulting in lost color and lost detail information," AMD added. 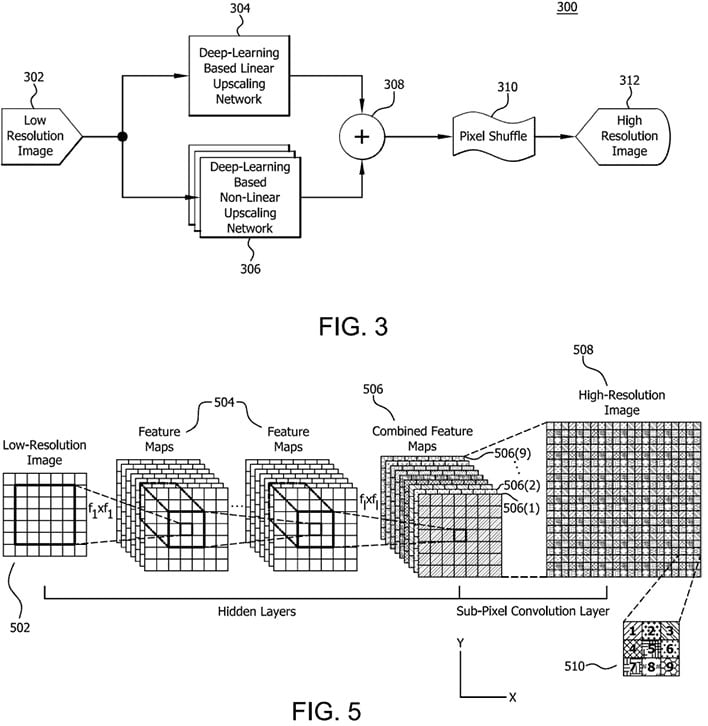 AMD's solution is to use a combination of linear and non-linear techniques to more efficiently super resolve images. According to AMD, its patented technology preserves the original image during the upscaling process, while improving the overall fidelity.
"A super resolution processing method is provided which improves processing performance. The method includes receiving an input image having a first resolution, generating linear down-sampled versions of the input image by down-sampling the input image via a linear upscaling network and generating non-linear down-sampled versions of the input image by down-sampling the input image via a non-linear upscaling network. The method also includes converting the down-sampled versions of the input image into pixels of an output image having a second resolution higher than the first resolution and providing the output image for display," AMD explains.
AMD also suggests its patented technique could work on various different devices, and not just dedicated graphics cards. In addition to PCs and "a gaming device," which we take to mean a game console, AMD specifically mentions various other gadgets, such as handhelds, set-top boxes, televisions, mobile phones, and tablets.
One thing to note is that AMD filed this patent back in November 2019, it's just wasn't published until now. There could be (and probably are) other patents related to AMD's FidelityFX Super Resolution technology. However it works, we're eager to see it in action.