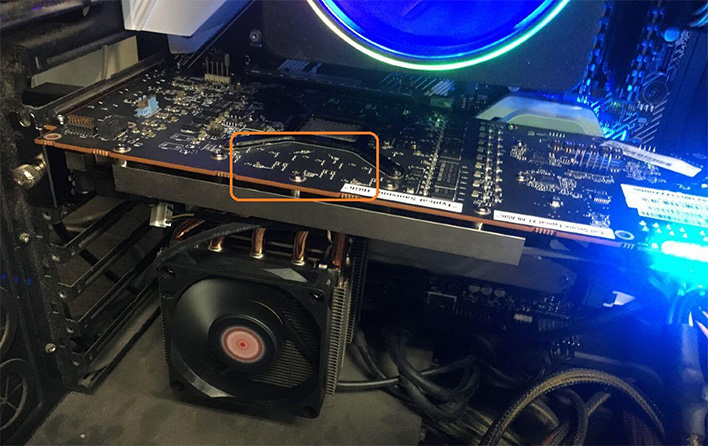 It appears as though one of AMD's upcoming Radeon RX 6000 series graphics cards has been spotted in the wild. While it is not clear which specific model is depicted, the photo purportedly shows an engineering sample installed in a test system, with some interesting details observable. Such as the onboard memory arrangement.
The photo traces back to a post on the Bilibili forums, as discovered by @Avery78 on Twitter (hat tip to the eagle-eyed fellow). If looking closely, there are some potentially revealing stickers applied to the card. One of them reads, "Typical Samsung 16Gb," in presumed reference to the memory chips, to denote 16GB (with a capital "B") of GDDR6 memory (Samsung does not make GDDR6X that we are aware of).
Also visible is what appears to be a 3+3+2 memory module layout. This suggests a 256-bit memory bus, same as NVIDIA's GeForce RTX 3070 (and lower than the 384-bit bus on the GeForce RTX 3090 or 320-bit bus on the GeForce RTX 3080).
Looking at the other sticker, the legible section reads, "Typical XT A0 ASIC." This seemingly denotes that it is a Radeon RX 6000 series XT card for consumers and gamers, and not a professional graphics card. The question is, which one?
There is no way of telling from this engineering sample. The only thing we feel confident about is that it represents an upcoming graphics card based on AMD's second generation Radeon DNA (RDNA 2) architecture. Given the memory arrangement, however, we doubt this is Big Navi fully unleashed.
At least we will not have to wait too terribly long to find out. AMD has a couple of events scheduled for next month—a Zen 3 reveal on October 8, and an RDNA 2 announcement on October 28.