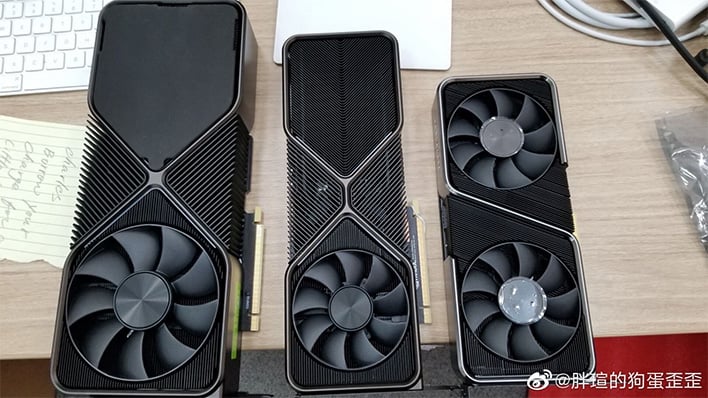 We can tell you all day long and until we are blue in the face that the GeForce RTX 3090 is a monumentally big card, with sheer size to match its beastly specifications. But as they say, a picture is worth a thousand words. Fortunately, someone has gathered up the entire GeForce RTX 30 series and plopped them next to each other for a photo shoot.
It is easy to spot the GeForce RTX 3090 among the bunch—it is the hulking graphics card on the left, situated next to a GeForce RTX 3080 in the middle, and a GeForce RTX 3070 on the right. Hat tip goes to Twitter user @davideneco25320 for digging the photo up from the web, most likely from China's Weibo forum. It is an Ampere family photo shoot (minus the cards' machine learning cousin, A100, with its fancy 7nm digs instead of Samsung's 8nm process).