Most of the focus in the PC space recently has been on new graphics card, with NVIDIA launching its GeForce RTX 30 series and AMD prepping its upcoming Big Navi release. But what about CPUs? As AMD has said time again, Zen 3 is on track to launch this year. And if the latest rumor is true, one of the upcoming CPU models will be a 10-core processor.
This is notable because AMD's current generation Ryzen 3000 series on the desktop consists of 4-core/8-thread, 6-core/6-thread and 6-core/12-thread, 8-core/16-thread, and 16-core/32-thread options (and higher, if including its high-end desktop Threadripper options).
News of a potential 10-core and presumably 20-thread offering comes from Yuri Bubliy (@1usmus), developer of the DRAM Calculator for Ryzen and the ClockTuner for Ryzen utilities.

In a follow-up Tweet, Bubliy explained it would be configured with "10 cores per 2 CCDs," which boils down to 5 cores per core chiplet die (5+5 core complex, or CCX). Bubliy also claims that AMD already added this to its AGESA 1.0.8.1 firmware code, which has recently found its way to BIOS updates by AMD's hardware partners.
That would suggest a confirmation of sorts, of a 10-core/20-thread Zen 3 Vermeer CPU being on the horizon. But of course we will have to wait and see. 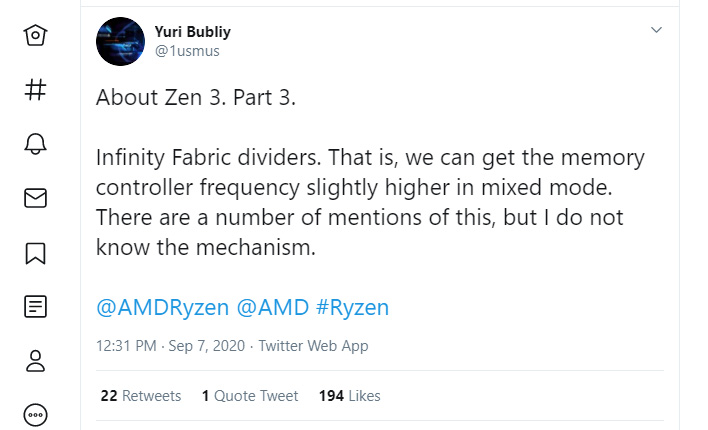 In another tweet, Bubliy also mentions Infinity Fabric dividers headed to Zen 3.
"That is, we can get the memory controller frequency slightly higher in mixed mode. There are a number of mentions of this, but I do not know the mechanism," Bubliy said.
I take this to mean he also found mentions of this in AGESA 1.0.8.1, but unfortunately there are not any further details to go on at the moment. It is potentially something to look forward to all the same, as it could pave the way for some finer grain overclocking.

Lastly, Bubliy also mentioned there being a Curve Optimizer. He said this will allow Zen 3 owners to "configure the boost of the Ryzen processor" and also "customize the frequency for each core without any restrictions."
Zen 3 is shaping up to be an interesting launch. In addition to these latest revelations, Zen 3 is rumored to deliver a nice boost in IPC performance, perhaps even up to 20 percent. Stay tuned, folks.